It was Brother Joseph's 70th birthday and Joseph Fernandes and Joel Wilson from All Saints High School hosted a small get together dinner at Joseph's house in Habsiguda. I was glad to be in attendance and spend time with our favorite teacher, our 'cricket Brother' who taught us so much.
I asked Brother Joseph about some of the things he recollects from his years as a teacher. He smiled and said he could share a few incidents.

The first was when he was Principal of the school. A parent had come with his child and something in that interaction fuelled a flareup. Angry words were exchanged and both parties shouted at each other. The parent left. After he left Brother Joseph realised that he should not have behaved like that. He wrote a note to the parent, apologising for his behavior.  The next day the parent, a bank employee, came to school with sweets and fruits, and in an emotional tone told Brother Joseph how he showed that note to everyone in his office and how much it impacted him to know the kind of a person his child's Principal was. Brother Joseph says he remembers that incident clearly.

The second was when he was Principal of a school in Gannavaram. There was a leper colony closeby and the lepers had to go to a well and draw water for their needs every day. Considering their state it is not easy and a lot of hard work. Brother Joseph asked the children if they should do something by contributing some money. The children contributed money and they had an overhead tank installed with taps near each house so they get running water. When the leper colony administrator said that he could have their name written on the tank, the students decided that it was better they did not take credit. It was enough that the job was done. 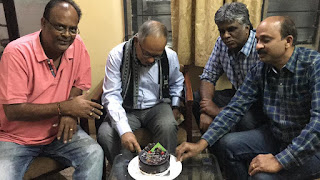 Another incident was when a particular section was notorious for bad results - 8D or something. As Principal Brother Joseph decided to have an honest chat with the boys. 'Do you want to pass?' he asked. 'If so, I will organise special coaching for you.' The boys agreed. Brother Joseph had classes for the boys in the morning before school and after school in the evening going up to 11 pm. The boys stayed in the school for that month. Twenty of the forty boys passed and Brother Joseph says that when some of those boys meet him, they still remember how that helped them.

In another incident, Brother Joseph says he used to see an old couple begging near the church. He would always give them something when he saw them. One day he found that the old lady was unwell and had not been coming to beg. He went in search of her and found her in a bad state. She was crying perhaps and he asked her gently 'Are you afraid of dying?' She looked at him and said in Telugu 'Dora, nuvvu unnappudu nakeme bhayam?' (Dora, when you are there what fear do I have?). Brother Joseph was very touched when she said these words. When he left she was peaceful. She died the next day.

Another student wrote a two-page poem to Brother he said. Brother Joseph does not remember who the boy was but he has preserved the poem. 'Sometimes I feel like putting it on facebook and asking who has written such a beautiful poem to me. Please identify the poem and get in touch with me.' I asked Brother Joseph to share the poem. I will share it here if he does.

There were so many more stories - of a girl who fell in love and had no one to tell at home and was in trouble. Brother Joseph counselled her and she wrote a long letter to him thanking him for his support. Or when a bright student Ravi Shankar, a prominent businessman now, always remembers coming with some fever or headache to Brother and taking some medicine and feeling better.

A word here, an act there, Brother Joseph went about giving relief and solace to so many confused, angry, scared and frustrated children, one act of love at a time. And there are so many more stories to hear from Brother Joseph which I will record as I hear them.

Happy 70th Brother. What can I say? Thank you for everything. And Joseph, Padma and Mili, thanks for your wonderful hospitality.
Posted by Harimohan at 10:16 AM