It is a play written by Edmond Rostand and they say that when the play opened and the curtain fell the audience was applauding for a full hour. 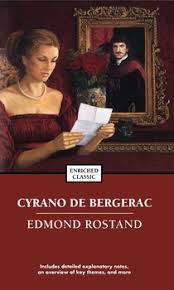 Cyrano de Bergerac is a nobleman who is a good duellist and a wonderful poet. However, he is very conscious of his long nose which he feels makes him unattractive to women. He is in love with Roxane, a distant cousin but does not tell her of his love because he fears rejection because of his long nose. Roxane tells him she is in love with a young soldier Christian, who is rather dumb but good looking. When she tells Cyrano of her love for Christian he decides to help her find happiness by helping Christian. He even puts up with Christian's insults about his nose which he normally takes to heart and duels about.

Roxane, however, loves poetry and wit and Christian cannot offer her that. Cyrano offers to write for him and manages to convince Roxane that Christian writes beautiful poetry. Christian soon realises that Roxane loves the poetry and not him and wants to tell her the truth. When he approaches her with his coarse intelligence, she rejects him and he soon needs Cyrano's help. Meanwhile, Cyrano and Christian are sent to war. Roxane asks Cyrano to protect Christian from harm and makes sure he writes to her every day. Cyrano agrees and writes to her every day. So passionately does he write that Roxane lands up at the warfront. Unfortunately for her, Christian dies in battle. She is left with the last letter he wrote for her (Cyrano wrote for her).

Roxane becomes a nun unable to cope with the loss of her love. It's twenty years gone and Cyrano still comes every week to give her news of the outside world. he has still not told her that it was he who wrote the letters. That it was he whose soul she loved. But one day when he is coming to meet her he is injured by a falling log and as he lies mortally wounded he asks her that he would like to read the last letter Christian wrote. As he reads the letter, Roxane understands that it was Cyrano who wrote those letters, and her doubt is confirmed as Cyrano reads the letter even in the failing light. s Cyrano dies, his friends tells Roxane that Cyrano had loved her with his heart and soul and had not told her because he thought his long nose was not good enough.

Old world romance with all its chivalry, sacrifice and nobility. All three characters never get what they want because they are dogged by their own doubts. For romance, it's superb. One of the best I have read. Thanks Sagar.
Posted by Harimohan at 11:09 PM