Vinod knows books and authors far better than anyone I do so I asked him to suggest a book a month, actually lend me one a month, because he has one of the best collections of books I have ever seen with anyone. He gave me 21 Principles of Leadership a couple of weeks ago and then this 'Cry, The Beloved Country' by Alan Paton. It was published in 1948 and is considered one of the best novels of our time. Made into movies, twice. 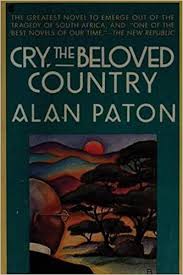 It's set in South Africa and starts off in the small Zulu town of Ndotsheni in Natal far away from Johannesburg. Apartheid is in force and blacks are living in poor conditions. Stephen Kumalo an aging black pastor in the village church receives a letter asking him to come to Johannesburg because his sister Gertrude is unwell. Now Stephen knows nothing about Johannesburg, knows it will cost him a lot of money and trouble but sets out. his sister had left many years ago in search of her husband but more importantly, his own son Absalom has also been lost in Johannesburg. Kumalo goes to Johannesburg, finds his sister living in disrepute and rescues her and his little nephew, tracks his son relentlessly who is now revealed to be a serial offender who has been to a reformatory school (with no good effect). Kumalo has the help of a local pastor, an English priest and another white man. Kumalo meets his brother John who is a politician, trying to make a quick buck while appearing to leverage the black anger, wanting a share in the gold mining profits. It is with John's son that Stephen's son commits his illegal acts.

The death of a white man who is a crusader for black rights by young black men causes an uproar. Soon we know that the killer is none other than Stephen's son who is now in jail. Stephen's son has meanwhile made a girl pregnant and Stephen takes her in too with promise of marriage to his son. Worse, the white man who died, is the son of the white man who controls land in Ndotstheni, Jarvis. The scene where Stephen meets Jarvis is beautifully written and one wonders how so much pain can come on to the paper from a pen. The boy is sentenced to death, Stephen returns home with his daughter in law and unborn grandson, helps his own people find ways to sustain themselves so they do not need to go to Johannesburg and live in shanty town. And he is helped in this noble aim by the white man who lost his only idealistic son, a fan of Abraham Lincoln, to the growing discontent and lack of guidance among the young blacks, characterised by Stephen Kumalo's son.

Powerful writing, full of the wisdom of life, and the kind of stuff that makes you want to write like that - once in your life. Thanks Vinod.
Posted by Harimohan at 8:53 AM