Sagar gifted me four books - Tagore's collection - four Omnibus collections. The first one is the most daunting, one thousand pages in all. It has 'Gora' a 500-page novel, Gitanjali, Boyhood Days, Creative Unity and The collection of short stories. 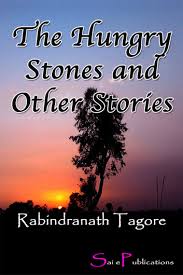 I began with the collection of short stories. I had read a few before - 'Hungry Stones', a story of a haunted palace and 'Cabuliwallah', which is the best of Tagore's short stories to me. How Mini forgets the relationships she shared with Cabuliwallah and grows up and reminds the Cabuliwallah that he too must go and start the relationship anew with his own daughter in Afghanistan. Poignant in the way it's written and told. 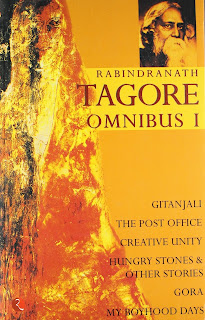 Other stories include 'The Victory' (a story about a court poet who loses out to another because the new poet has more words than him, and in resignation the old poet merely sings, and is kicked out of the court for not having enough words to challenge the new poet - but the Princess crowns him the victor as he is dying from drinking poison), 'Once there was a king', 'The Home-coming' (the mischievous boy who is sent to Calcutta and dies in a delirium dreaming of his mother), 'My Lord, the Baby' (the servant who loses his beloved master's baby and who raises his own as if he was his master's son and gives him back saying that he is your own), 'The Kingdom of Cards', (a satire on how a few new cards change the caste system in a pack of cards thanks to their free will), 'The Devotee' (a woman who escapes the eyes of a fake guru), 'Vision' (the girl who goes blind thanks to her egoistic doctor husband who treats her and how her brother saves her from being relegated to being the second wife), 'The Babus of Nayanjore (the old man who is in dire straits but tries to keep up the pomp of his ancestors and how the narrator tries to fool him but ends up marrying the old man's granddaughter), 'Living or Dead?' (the story of an old woman who is left for dead when still alive, who finally has to prove that she is alive by really dying), 'We Crown Thee King' (an Anglophile young man who marries into a family of patriots and how his wife and sisters-in-law wean him away gently from giving up his self-respect) and 'The Renunciation' (a story of a high caste man who is fooled into marrying a shudra woman and how when he hears the tale of deception and the story behind it, decides to live with her and reject caste even at the cost of being forsaken by his father).

Each one a classic - my way of judging stories is by their stickiness. Do I remember what happened when I glance at the title, at the characters. If I remember the story and can reconstruct it in a line or two after a week, then it works for me. It has connected with me.
Posted by Harimohan at 9:19 AM