An Early Morning Trip to Shadaab

It's been a while since Vasu and I planned on the early morning drive to Shadaab in the Old city and taste the paya and stuff. Much has been said about it in the circles and we decided that enough was enough and went there this morning. We met at Banjara Hills at 545 and were off. The roads were empty enough and so was Shadaab. 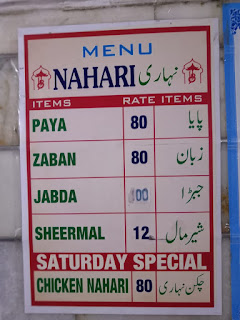 Apparently the outside section is not for the serious and heavy eaters. The moment we told them of our intentions and preferred food they asked us to move inside, a cosier place. There the Marathi speaking waiters came and took the order and it was clear that we did not really know what to order. He used his own discretion and came back with paya, sheermal roti and kheema and sabzi gurda. These were the suggested items (along with mutton biryani - at 6 in the morning?)
Anyway this was a first time for me with sheermal which is a solid piece of bread and good to keep you going for days, and the paya, which was a nice and spicy gravy. I took a bite of the kheema and the sabzi and never felt so full in my life. I polished off some hot tea after that.
We were the first paya and sheermal eaters inside and we were soon joined by the regulars. One young lad walked in alone, sat with all the confidence of a king, or rather someone who has put away thousands of payas in his life and with great care and precision said - ek paya. There was a pause and hen he said - ek sheermal. Pause, And then, sabzi gurda. There was some gravitas to the entire situation. Aha, that's how it ought to be done.

But there are other ways too. A bunch of four fellows came in straight from the bed. 'Paya' they yelled. When the waiter said he only has sheermal they educated him on the order in which food must be made. Like for instance if sabzi gurda was ready at 6, then tandoori roti must be ready too at 6 and not 8 as the waiter said. The waiter bored them with some technicalities and they finally lost track of the story. V abrasive fellows. Somehow they settled down and we left  before more disharmony was practiced.

One item knocked off the list. This early morning Shadaab visit.
Posted by Harimohan at 10:52 PM