Jagjit Singh brings back memories of Arth and Saath Saath to me. I also remember the famous duo of Jagjit and Chitra Singh on the cover of their music cassettes and records. I am also glad I attended a Jagjit Singh show at Hyderabad where he sang all kinds of songs after his main performance was over and regaled the audience. 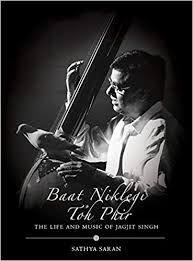 Born in a normal middle-class family in Punjab with strict Namdhari values, Jagjit Singh was third of eleven siblings, seven of whom survived. His father worked in the state government and was deeply religious. The early singing of the gurbani and his initiation into learning music from Pandit Chaggan Lal first and then Ustad Jamal Khan prepared young Jagjit Singh. He was a keen student, enjoyed music more than anything else and would deeply immerse himself in music and instruments. His talent shone and he won several awards early on. Most of his education also seems to have been based on his singing talent - he had a Principal who nurtured this talent.

An invitation by character actor Om Prakash to visit Bombay and try his luck changed things a bit. After the first visit which was not fruitful Jagjit came again to Bombay and this time made a mark. He also met Chitra who was then married (and had one child) to a corporate executive who enjoyed music and had his own recording studio even. Chitra had made several jingles then before her marriage broke up. She was shifted to a smaller house while her ex-husband married his secretary. Jagjit helped Chitra in these years of struggle their house he helped Chitra and they were soon married - Jagjit asked her ex-husband whom he knew as well if he could marry her.

Jagjit stuck to ghazals and they both made albums which soon earned an audience of their own. One album after another, Arth and Saath, their own child Vivek, fame, travel and money followed. It was all one high after another until the untimely death of their son, nineteen year old Vivek, in a road accident in Bandra in 1990. I was surprised to know that Sairaj Bahutule, the cricketer was one of the other two passengers in the car. That changed their lives - Chitra stopped singing completely, Jagjit found it difficult to come to terms. Chitra's daughter Monica, a famous model then, was the one who tried to bring some sanity into their lives through spiritualism. Monica herself would commit suicide later when she was forty-nine battling depression after two marriages.

Jagjit Singh's humility, simplicity, intelligence and eagerness to learn and master his craft come across clearly. His comfort and mastery with technology, his desire to create his own path by using technology in ghazals, having English names for their albums, his brilliance at writing, arranging, composing, singing are well known. But it's his humility - in making tea, in ironing clothes, in finding autos even at the height of his success, his generosity to people who reached out to him for help, his conviction in himself and his art, all stand out.

The book took me down memory lane. It reminded me of the cassettes I have - of Jagjit Singh's ghazals and the other one which was the combination of 'Arth' and 'Saath Saath'. Despite not knowing the meaning of those words or emotions somehow the music touched me. My all-time favorite was and remains 'Jhuki Jhuki si nazar' which is a song I learned to sing a bit.

The book is well written and Sathya's effort in writing it shows in the easy flow and well organised and structured book. Lots of pictures. It's a collector's item for all Jagjit Singh fans.
Posted by Harimohan at 12:02 PM