Thought for the Day - If We Don't Interfere With Life, It Comes Up With the Best Solutions 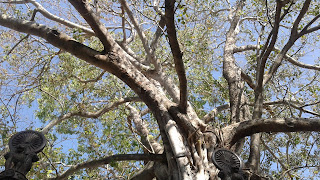 He stood there next to my cart, not looking at me, but certainly intending to cut into the line once the guy in front was done with. I decided to wait and see what he would do because he would physically have to push the cart aside to cut into the line. I wondered whether he would ask me or not, more so since there was no one else behind me. The moment the guy in front moved to the billing counter, the young man pushed the cart aside without looking at me and stepped into the line.

I normally might have asked a question or two but this time I decided to wait and watch.
And then this happened.

A young girl appeared out of nowhere and pushed my cart to the next billing counter. 'Come here sir,' she said. She worked at a frenetic pace, unloading my stuff and billing me so fast that I was done even before the guy at the next counter had moved.

As I sat in the car park waiting to reverse I saw this young man walk past me, not looking me in the eye, carrying the few items he had. I realised that I had way more than he had and the irony was clear to both of us.

I was left wondering how life has a way of making things right perhaps, if we do not interfere with its process. The key I felt, was to be non-judgmental, non self-righteous (I tried hard to be that today) and certainly to trust the process and let it unfold.
Posted by Harimohan at 10:00 AM