I got a call on the afternoon of the 19th of April. I heard Abanti's voice at the other end. Abanti is my student from the Department of Dance where I teach 'Arts Management' as guest faculty. She was excited and justifiably so because she and her colleagues - Saranya, Anju and Priyanka - were performing at the Campus Concert Series in a program titled 'An Evening of Bharatanatyam and Kuchipudi' at the School of Humanities, University of Hyderabad. Could I come? 'This is our gift to you sir,' she said (dramatically, as Abanti is wont to, but with all sincerity) and I know they meant it. I was glad they called to invite me and even gladder to hear the joy in their voice at the chance to perform. I was doubtful about going though because the program was on that very evening and I had a possible meeting scheduled that could clash with it. The four performers were invited to perform Bharatanatyam and Kuchipudi.
I do not understand much of classical dance but I can feel their joy and experience their effort and pleasure of performing on stage. I go if I get half a chance. But this one looked difficult especially after Suresh confirmed that we would be meeting at 430 pm. The performance was at 615 pm. But as luck would have it I actually had an interested partner in Suresh who was game to watch the performance. We made it slightly late to the venue thanks to the traffic. 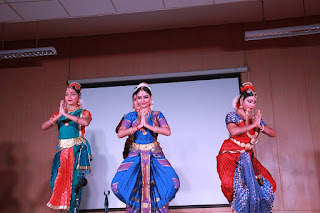 As we walked into a fully packed auditorium of the School of Humanities in the University of Hyderabad, we could see the ending part of a performance where all four performed. Suresh and I grabbed two seats in the last row and viewed the next performance. Saranya and Priyanka started the show and though Priyanka had to step out midway, Saranya carried on the good work that they had both started and went on and on and on. It was beautiful just to watch her expressions, effort and the elegance. She deservedly got a rousing applause for the performance - it lasted all of 20 minutes or more. No less was Anju's performance that came up next and she essayed the expressions and movements of a child, Krishna, I suspect, beautifully with lithe, quicksilver movements. Then Abanti and Anju came back for a performance of the Ardhanareeswara but sadly we had to leave then. I briefly met Saranya and Priyanka who were off stage then and told them how much we loved the performances. I was glad I saw all of them perform. 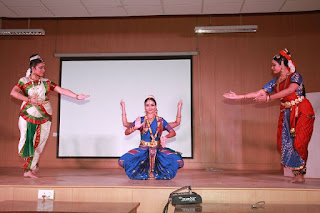 It's the joy they get while performing that is the most palpable. Then comes the wonder - what happens to them when they step on the stage? They look so different, so confident and it's as if some divine spirit has entered them. The stamina, strength, effort and mostly the desire to perform well and please the audience comes across so much that one hopes they get more and more opportunities to perform and share the beauty of their art with so many others.
'It's so good,' said Suresh. ' I think I should invite the students to perform at our corporate events. Very impressive.' I nodded. I hope he does.

Thanks Anju, Abanti, Sranya and Priyanka. Wonderful performance. How I wish I could see the others perform too - Laxmi Tejaswitha, Jhansi, Praveen, Sharath, Parijatha. Hopefully I will get a chance to see them perform live. In the past couple of years I had the opportunity of watching the performances of most of my students and sharing their joy in performances big and small. Nowhere have I experienced the joy of expression as I have with students from the Department of Dance and I hope and pray they carry this joy in their heart as long as they live.
Posted by Harimohan at 10:32 PM

Thank you would indeed be a phrase of a lesser worth to express the thankfulness we all have towards you. That you have come, saw and got back to us is more than what we could get Sir. Having a mentor like you doubly doubles the reason to remain passionate about whatever we do.

Thanks Abanti. I thoroughly enjoyed the evening and wished I could have stayed till the entire program was over. You were all fantastic and we as the audience loved it. :)