I promised Anjali, the die-hard Sunrisers Hyderabad and David Warner fan, that I would take her to the opening match of the 2017 version. I had decided to buy tickets, considering the uncertainty over the passes that HCA gives to first class cricketers (they gave one). To my surprise I found that the tickets to the opening game were all sold. Amidst great emotional upheavals I finally booked tickets for the second game on the 9th.
However it so happened that I managed to get two passes for the opening game and Shobha and Anjali, both die hard Bollywood, reality show, cricket and sports fans, decided to see the match and the opening ceremony. So I dropped them at the venue and made off to Don's house to watch it on TV.
I checked once to find out if they were bored with the match and if they wanted to come away at half time. I got an emphatic No (from Anjali). I picked them up at the end of the game which was well past 12 in the night and well there was a whole new excitement about the game. The passes were of the HCA lounge where they are in some sort of an enclosed air conditioned space and though the comforts and food are nothing to complain about the complete insulation from the sound and lack of a TV in the room left them perplexed. There was no way they could know what was happening outside other than their own senses and the big screen at the ground. But the first experience is always a big one so Anjali was happy.

Now, we still had the tickets I booked. This was for some stand I don't know which and it looked fine on the computer screen. We started off in the hot sun at 2 in the afternoon and barely made it to the ground at 330 - the traffic near the ground takes up 45 minutes at least. We could park, squeeze our way through and found ourselves at ground level but exactly perpendicular to the pitch which is the worst position to watch a match. Anyway Anjali, all dressed in her Sunrisers t shirt and waving her Sunrisers flag, was super happy to be in with the crowd. We were next to a huge stage where they played music from and exhorted us to shout and whistle and dance etc. So the crowd was dancing all the time and jumping about and Anjali seemed to identify with this kind of a thing. She was on her feet almost all the time waving her flag, those balloons and cards. We had an enterprising chap selling burgers and he would go 'Burgerrr, Burgerrr' in the same manner as one goes 'Sixerrr, Sixerrr' or 'Sachinnn, Sachinnn' and the crowd joined him in his chant. Lots of food - water melon, french fries, burgers, pizzas, soft drinks. 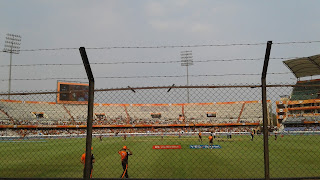 The match was the most boring one I ever watched. For starters they could not read Rashid Khan at all and soon got themselves into a tangle. Then they opened with Raina who pretty much settled the issue by giving away three sixes in his first two overs. And then he came back to say that the' Afghani bowler' bowled well (he could well say that Australian bowler or that South Indian bowler bowled well)  and they did not play him before so they got out (give me a break) and that their bowling was bad and the batting could do better. I think they should change their captain and get McCullum on if they need any life. Why waste two good swing bowlers like Dhawal Kulkarni and Praveen Kumar and bowl himself with the new ball? For just that one decision I'd sack Raina.

Anyway it took a long time to extricate ourselves from the stadium parking and we were home, tired and happy. Anjali lost her flag but got back two cards with that 4 and 6 printed on them. Overall she was thrilled with the experience and now hopefully will find other people more enthusiastic and closer to her age to watch the games with - like her cousins. Hopefully I have seen the last of these games from the stands. I realised after a while I was the oldest person in these stands - the girl next to me would dance from her seat with new moves every time a song was played. All oldies I think head for the air conditioned lounges and I should get there too if I want to watch at the ground. Or do what I did all these years - watch at home.
Posted by Harimohan at 10:32 AM