Delightful. A young mother with a caring husband and two kids is recovering from a bout of depression. The young family is struggling to make ends meet as it is - when she finds out that she has been fired from her job upon reporting back. The foreman and the boss have discovered in her absence that they could do without an extra hand and that the job could be done with 16 instead of 17 people. The tradeoff for the others - they get to choose their colleague or their bonus of about 1000 euros. In a  ballot where the influential foreman who does not favour her is present, the vote goes for the bonus. But the girl's friend convinces the boss to have a secret ballot without the influence of the foreman to get a fair verdict. He agrees. The ballot is on Monday. The girl has two days and one night to convince her colleagues. 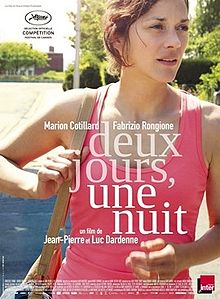 Helped by her husband and friends, coping with her medication and depression, she meets all her colleagues. From circumspect greetings, to people who break down. to those who abuse, couples who break up, she meets them all. She grows in the process as she witnesses the frightened and even abused lives of her colleagues who are so fearful of losing the bonus and its benefits. She sees generosity and fear, those who stand for what they think is right and those who take a relook at their own lives.

The ballot results pose an interesting question - but its inconsequential by then because she has moved far ahead of the rest, of her fears and doubts.

What a lovely movie.
Posted by Harimohan at 4:23 PM