A young student Dilip Singh joins a college. He checks into a guest house inhabited by a student of the same college - a footloose and reckless student Rananjay Singh. Dilip Singh is not interested in getting into fights and skirmishes and tries to avoid the gang wars that are part of this college and his roommate. But when he goes to get admission in the hostel, he gets ragged and finds himself stripped and thrown into a room naked. He realises there is another naked person in the room who is a victim of Jadwal the kingpin of the ragger gang - a young lecturer named Anuja. Both are left out in the open naked later. In response to their excesses Rananjay, takes the young man to the local ganglord Banna, a leader trying to put the Rajputs together to claim his dream of Rajputana for the Rajputs. Banna tells the boys to attack Jadwal. They do and his gang retaliates. Banna handles the issue. 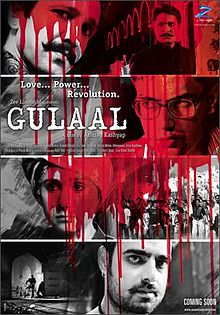 Rananjay is the son of the local King but he hates his father and his legacy. His father also has an illegitimate son and daughter who are looking to - god knows what - but they are constantly messing up every ones trip. Anyway Rananjay contests elections, is abducted and killed and his body strung in the middle of the town. Dilip is made the next candidate and he wins against the illegitimate daughter of the King. The girl however seduces him and turns him against his mentor Banna. In the end pretty much everyone dies while the illegitimate son becomes the leader of the Rajputana movement.

Gulaal is the color they use to hide their faces. Why, what, how? Many questions are left unanswered as are motives. What starts with a bang ends with a whimper. What is the story of the illegitimate son and daughter? What do they want? Anyway, some lovely little pieces - Piyush Mihra's role as a John Lennon fan is brilliant as his music. Rananjay's room. Abhimanyu Singh is fantastic as Rananjay Singh. Kay Kay Menon as Banna and a host of fabulous actors including Mahi Gill complete a great cast. The resolution was disappointing though and I felt that the Rajputana cause somehow did not drag the movie with as much energy as it should have. No one seems to be bothered about it.
Posted by Harimohan at 4:41 PM