Stumbled on this movie by chance and stayed up late watching it. I had meant to watch it and had heard good things about it. Somehow I hoped it would not be a sad and tragic movie like almost all Mumbai based movies are. 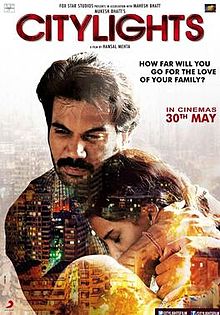 I remember my initiation into the Mumbai stories from 'Salaam Bombay' - a movie I watched with a pretty girl who wanted to go to the movies with me and nineteen other guys who tagged along because they also wanted to go to the movies with me. No prizes for guessing where that story with that girl went. It went the way of the movie. But then I got hooked on to L. Subramaniam's violin in that soulful title music of 'Salaam Bombay' and forever remember the sadness and toughness of that life. The movies that followed - 'Gaman', 'Gharonda' etc went in a similar vein. '

'City Lights' starts with all that is Mumbai to an outsider - the first con job happens in minutes and the hero loses all he has almost on the promise of receiving a house the other chap never owned. Out on the roads the two are helped by a bar dancer who sets them up in n under construction building. The wife is then lured into the bar dancing job. The hero finds a job with a security agency. Things lead from one thing to another - temptation, danger and finally a less than happy and less than perfect ending. Mostly because I think the writing got lazy - the boy had options still and could have made it yet. The end is different but still tinged with sadness.

Rajkummar Rao moulds himself nicely into the role of Deepak Singh, ex-army driver and failed garment businessman. The other security guard did a fine job and in fact shares much screen space. But the movie does bring out the fragility of life across so well, especially for someone coming into a hard space like Mumbai. What it does not do justice to is how the city's steel creeps into you once you live there for a month. Which is what should have happened to this family. To me that's out of character of the city - I lived there and I know what it can do to you. It toughens you. Doesn't weaken you. The movie is based on a successful movie 'Metro Manila' - it would have worked anywhere else for me except Mumbai.

Posted by Harimohan at 4:26 PM