I still need to get my head around this one even after having watched it and having read about it. The movie, nicely titled into parts - The Gold Watch, The Bonnie Episode etc as Quentin Tarantino normally does - unfolds in its own ways and you enjoy each separately but I struggled to put it all together. The sequences are not chronological. It took me a while to understand what really happened and when did Vince really die and why and what was Butch's role in the story and why he behaves the way he does. Quentin Tarantino completely messes with your head as he plays out long sequences with his characters, as they casually discuss stuff from cheese burgers to god's miracles and what not and suddenly the scene moves into a tense situation  where guns are being flashed or people are being shot and stabbed. Tarantino stretches those moments with great relish. All the time there is some nice music playing in the background. 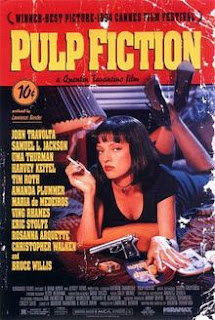 I will write down the story - more for myself. A couple of contract killers, Vincent Vega (John Travolta) and Jules Winnfield (Samuel Jackson), working for a gangster Marsellus Wallace are given the job of bringing back a briefcase. They go and get it - in the process killing off a few people who double crossed the boss. On the way back Winnfield and Vega have a disagreement - that their surviving a close range shooting at the murder scene was a miracle. Vega turns to ask the informer in the back seat and accidentally shoots him, blowing his brains all over them and the car. They head to their friend Jimmy (Tarantino) who has a problem keeping the body and the car as his wife won't like it and they get a mob cleaner to clean it up.

The two gangsters are given Jimmy's T shirts and shorts to wear and they head for breakfast at a diner. At the diner they bump into a hold up staged by two robbers, a man called Ringo and a woman called Honeybunny, and manage to save the briefcase. They then meet their boss who is busy fixing a boxing match with boxer Butch Coolidge. Having given the briefcase to the boss Vega goes to entertain Wallace's wife Mia who is a drug addict. She almost kills herself by overdose at the end of the evening. Vega panics and goes back to the guy who sold him the heroin and they retrieve her by stabbing her in the heart with an adrenaline shot.

Meanwhile Butch Coolidge does not honour Marsellus Wallace's agreement to throw the match and instead wins it - he kills his opponent in the ring. Butch plans to run away with his girlfriend before the gangsters get him but he discovers she has not packed the gold watch given to him by his father, an ex-army man. He returns to his apartment knowing that the gangsters would be waiting for him, and lets himself in, finds the watch and is about to make himself a snack when he notices a gun on the counter. He hears a sound and finds Vincent Vega emerging from the bathroom. He shoots Vincent and makes good his escape.

As luck would have it, Marsellus Wallace spots him at a traffic signal. Butch drives his car into Wallace. The car is hit by another car and a badly hurt Butch is chased by a badly hurt Wallace who keeps firing his gun wildly shooting passersby. They fall into a shop owned by a homosexual deviant who captures the wounded men, ties them up and calls his homosexual friend who starts with raping Wallace. Butch unties himself and escapes, kills the shop owner and frees Wallace from being further raped. Wallace fires his rapist in his privates and slowly watches him suffer and also lets Butch go for rescuing him. Butch takes the rapist's bike and runs away with his girlfriend. Meanwhile Jules is in all likelihood walking the earth, seeking divine direction.

The film got 7 nominations at the Oscars and won the one for screenplay. Travolta's dying career was given a shot in the arm with this film they say. Many of Tarantino's old favorites show up. Uma Thurman is perfect in her role as Mia, Samuel Jackson is in one of his best roles as Jules, Bruce Willis as the neurotic Butch Coolidge, Pulp Fiction is just too much movie for one viewing. Got to watch it again. But now I get it - why Pulp Fiction is considered up there. One also wonders why genius has that arrogance - like a Rushdie has or a Tarantino - as they mock at you and play with the medium. And you, despite knowing that you are being mocked at, cannot but admire them for their sheer brilliance and ingenuity.

Posted by Harimohan at 5:20 PM

Ah glad I read this piece. Cant say if QT is arrogant, but there is a sense of whackiness + absolute confidence (together the words can mean arrogance :P) in how he approaches his characters and the whole dramatic effect they create - mostly with dialogue. A look at the 1st scene of Inglorious Basterds is just another example.

I have only seen Django Unchained, and some elements are there too..lots of violence, and a cockiness in the direction. Good experience, overall.

Hmmm, arrogance in a good way - as in the firm conviction that something is going to work when the world is not so sure about it. The first scene in Inglorious Basterds (even the name shows his cool cockiness) is among his top scenes - self confessed.

Raja, recommend PF to watch. Just the way he makes you bend your mind around the story with that non-linear story telling makes you wonder how he did what he did.

This is my all time favorite movie and I do not remember how many times I watched this. It will grip u all the way and all the time.

I do have the screenplay for this movie, which I collected when I was in LA, after watching it like 5 to 6 times and when you read the actual screenplay, that's a trip. I was very interested on movie screenplay's and I was wondering why this one got Oscar. Later when I was reading it., it was some experience.

You wrote the story of the movie. When can we expect the review? :)

Oh BTW, another thing I would like to mention here was, the story & screenplay was written by QT himself.

Prasanna,
Honestly I don't think I can review this movie. I feel hopelessly inadequate. Also I need to watch it many times over to even get what this guy was thinking when he made this movie. I wrote down the story more for clarity for myself really, I couldn't get what was happening when, even though it all seemed to perfectly fit in.
I am sure reading the screenplay must be interesting. Let me get my hands on that.
Makes sense - QT writing the story and screenplay himself - can't think of it happening any other way.

Here is the PDF link for the screenplay, this for you and your readers.,

Wow! Great. Thanks a ton Prasanna. Really thoughtful of you. :)