Brian De Palma (Scarface, Untouchables, Mission: Impossible) directs Al Pacino who plays Carlito Brigante, a hardened NY gangster and Sean Penn  who plays Dave Kleinfeld, his lawyer friend, in this gangster movie. Why am I watching so many gangster movies? But as the movie unfolds in Hindi film style, I felt it was more a love story than anything else. And Brian De Palma handles the love scenes very well indeed. 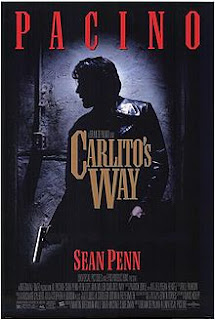 A hardened New York gangster involved in drug dealing and other offences, Carlito Brigante escapes a sentence of 30 years and comes out after having served only five years due to some technical fault that his lawyer friend finds in the investigation. He wants to go straight, save up money and head off to the Bahamas to live a peaceful life renting cars. But things are not so easy as he gets drawn into one situation or another - first with his cousin and then with his lawyer friend who gets him into deep trouble with the Italian mafia by bumping off one of the dons.

But the real story is this. Carlito meets his ex-love Gail after five years. He has ditched her when he went for the 30 year sentence. She is unhappy at being dumped by him. He says he did that because he knew she would have waited for him. Whoa! What's that if it's not a love story my friend. (The small scene at the restaurant - not many scenes have shown that longing, that feeling of coming home. Al Pacino surprises you with his ability to step into such contrasting roles.) The two lovers reconcile and plan a life together. The mafia is gunning for his life as are other enemies on the inside and the outside as Carlito plans his escape. The climax has a train station scene where Gail is waiting for Carlito to get away. The Grand Central station reminds you of the scene in 'The Untouchables' and De Palma leads us through it by the hand.

I loved the scene when Carlito and Gail meet in the restaurant. It is very sensitively shown - the embrace - and the feeling the two lovers have for one another. Their love scene also is beautifully shown and that's when I realised that its not a gangster story - its a love story after all. How much will Carlito now risk for his love? Al Pacino, Sean Penn are brilliant as usual.

Now for the next gangster movie. Good fellas?
Posted by Harimohan at 10:05 AM