Watching 'Chak De! India' with Anjali was a new experience. If I liked the movie the first time, I liked it even more now. The first time I watched it with bias surely - one was the strong anti-Shahrukh bias (which I have now more or less reconciled to and can watch him non-judgmentally) and two the fact that the movie came close on the release of The Men Within. Still, the biases did not colour me so much because even back then I thought Shahrukh did a great job and I knew that the structure of the film cannot but be what was presented as in any sports drama. 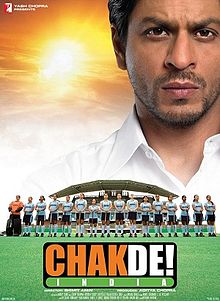 I especially liked Shahrukh's intense and pained character this time. Shows in the poster. The scene where the girls understand that India was greater than its individual states always stood out. This time I liked one more thing - the line - Acche team babe ke liye taqat ki nahin neeyat ki zaroorat hai (I am sure my friend Tarun Chauhan will agree - he is a big one for neeyat). This line is all about the values that bind the team, the values that will form the pillars of the team culture. The match with the men's team was a nice stroke and the way the men acknowledge the women's team's efforts is another highlight. Anjali was beside herself - do they win or lose? Of course my issues with the coach not being able to tame the rebellious Bindiya Naik (nice line, marke aayenge lekin haarke nahin aayenge), or teach the others how to break the man to man marking, or even having to tell his goalie what to do in the final shot remain. But then I am nitpicking as usual.

The song 'Maula mere' is haunting. Have to get it back into the playlist. Lovely movie. It brought back memories of those times. Will watch again.
Posted by Harimohan at 6:38 AM