The Fleaffair - Hyderabad's Own Flea Market

A flea market in Hyderabad! That sounded interesting. Shobha's friend Niveditha (www.theyellow banyan.com) had a stall at the market and had invited Shobhs. So Shobhs, Anjali and I went to Sawa Caffe on the Road No 9, Banjara Hills, in the lane opposite Meridian school and next to Fab India.The Fleaffair was located in the lawns.

It looked like a miniature Goa flea market of about 15-20 stalls Not so much in terms of stalls and people but in terms of atmosphere. There was some lovely music (being played by a youngster names Aradhya and he was singing beautifully). Stuff on offer was all sorts - from pastries to clothes, French food to window shades to chappals etc.

Niveditha's stall was right up front and she was managing it with her husband Indrajit. Right next to her stall was G Twins, a stall operated by Sharath, a freelance designer and also younger brother of my student Sushil from HCU, and his friend Kundan, the GTwins design store - nice t shirts et al.

I met Supreeta, one of the brains behind the show and asked her what prompted this idea. She said that she and her friends wanted to create a space for creative entrepreneurs in the city. Other cities like Pune and Bangalore have it, so why not here? 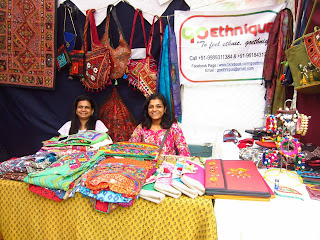 They sourced some of the creative entrepreneurs they knew, who had great ideas and the willingness to grow, and conducted the first Fleaffair a month ago at La Makaan. Drew about 7-10 stalls. And now this one, in the second month, with almost twice the number of stalls. 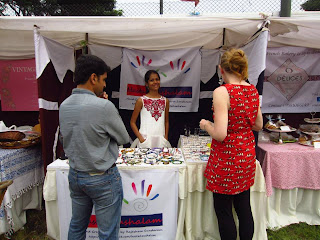 Supreeta and friends are part of the 'Tree Huggers Club', (so named because of the eco-friendly moorings of the group) which comprises of Supreeta, Harish Vasavan, Faizal and Rohini. Their fb page advertises the Fleaffair as one with Live Music, Art, Unlimited Love and Pure Passion - all there. Stalls ranged from knick knacks, snacks, jewellery, clothes, graphic t shorts, organic hand made soaps, graffiti merchandise.

Niveditha's stall, theyellowbanyan was right up front. It's a space that aspires to explore many possibilities through art. Niveditha also conducts art classes and the shop sold intention boards and some other interesting stuff. Anjali picked up one on wisdom and knowledge and it sits in her room - her intention spelt out clearly. Right next to her stall was the G Twins - managed by Kundan and Sharath and they had several G Twins T shirts and stuff for sale. I also met one entrepreneur selling creative window shades, saw one selling French pastries, one stall called Vintage Love, clothes, more yummy looking pastries, some jewellery. I loved the music young Aradhya played and all in all I enjoyed the experience. The atmosphere was vibrant and fun and I think its not a bad idea to have a stall there - it costs Rs. 1000 only to get your space. I could sell my books to workshops and if nothing else chat with some interesting people.

Fleaffair is a lovely initiative and must be supported by one and all. The culture and atmosphere of the space is nice and open, there are interesting people around, good music, great products and more than anything else the feeling of being in a flea market. It must catch on in a big way in my opinion - once a month seems perfect for now (but not longer because out of sight for two months will go out of the mind). As it picks up it could be a fortnightly affair and well, who knows what's in store for the Tree Huggers and the young entrepreneurs. More avenues, more possibilities.

I could not resist asking Supreeta if they hug trees once in a while symbolically. She smiled and said they do not. Might not be a bad idea - I'd like to hug a tree. Know what Supreeta, there is a business opportunity there - you could have a stall that gives people the experience of hugging a tree and listening to it. And I am not joking. I am sure many would sign up.

Posted by Harimohan at 1:51 PM

good idea. sounds like a smaller version of the Kala ghoda festival in Mumbai.