A 1979 adventure film loosely based on a real train robbery, 'the First Great Train Robbery' failed to impress despite its star cast and the star writer and director, Michael Crichton. The premise - a load of gold ingots that is being taken by train every month to pay English soldiers fighting the Crimean war has to be robbed while the train is in motion. Considered daring then because it had not been done before (the movie is set in the late 1880s) it never picked up speed despite all the delightful promise. I'd lay all blame on Crichton for that as writer and director. 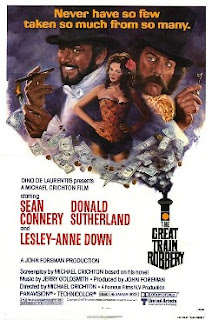 It somehow meanders and I wonder how Crichton managed that. One would think a great train robbery would be all about edge-of-the-seat action and with Sean Connery, Sutherland, Leslie Anne Downe you need little else. But it never took off. To get the four different keys from four different sources the chief character Edward (Connery) comes up with some rather awkward, implausible and convoluted schemes where it could have been done much more simply and more ingeniously. Anyway the four keys in place, the guard compromised should have everything tied up but even then, they somehow miss some small details and get caught. But to me that was only to be expected what with his planning. Of course he gets away too in a fairy tale fashion.

I found the life story of Michael Crichton more fascinating than the movie. He went to Harvard, wrote many novels but also screenplays and even directed movies, some big hits too (Coma). But he got way off the mark in this one. I'd skip it.
Posted by Harimohan at 4:20 PM