"I want to go and stay in a tent and do some hiking," said Anjali a day before. Just as I was wondering where I could get a tent and a hiking experience for the young and enthusiastic hiker I got a call from Vasu that tentative plans were afoot to go to this interesting place called Deccan Trails near Vikarabad. A two hour drive at the max from Hyderabad, tents and hiking (or what would pass for as hiking for Anjali) and the likelihood of a new experience spent in the company of friends. Anjali was elated and packed everything she needed from the book for a hiking trip - boots, cap, binoculars, magnifying glass, back pack, trail mix and water and all else - the epitome of a hiker with her back pack on.

Three cars then, Vasu, Geeta, Aditya and Ishan, Kiran, Anita, Shreya and Rohan, Koni and Sagarika, Ranjan and Ananya, Shobhs, Anjali and I. The news of cyclone Phailin apparently dampened the spirits of many campers and the place was near empty, Clouds looked ominous, a light rain threatened but we moved on. Get out of the city from the ORR near the APPA junction, head straight to Chevella, pass through to Manneguda, take left at Deccan agarbatti factory, take right on to mud road and lo behold, the trails await.


The cars are parked below in the flat space while the tents are on the small hillock at the top, a 15 minute climb. Nice, well appointed tents with in built loos, chairs to sit on and admire the view from what is probably the highest point there, absolute peace and quiet, a machaan to round things off. We checked in, sat on the machaan, went down for dinner, watched the millions of stars in the skies (ah how long has it been since we did anything like that) and finally crashed by 230.


There was a trail walk at 630 next morning and we were all ready for that. Anjali was super excited at the experience and was all clad in her hiker gear. A two hour walk through dense undergrowth, small streams, fields of carrots and then we arrived back. Anjali did the 2 hour trip by herself, refusing even a small assistance of carrying her backpack, save for a 5 minute (she corrected me and said it was 2 minutes) when I carried the brave little, resilient soul. Breakfast and then on to activities!

Rock climbing, flying fox, Burmah bridge and such other activities were on

offer with trained personnel. Kiran easily climbed the rock, as did Aditya, Sagarika, Shreya and Vasu. Rohan did too. Anita went up most distance and Shobhs gamely tried it. Then we headed to the flying fox where everyone slid down a rope and I did too, when I heard that we were to go down anyway and it looked the easiest way down. 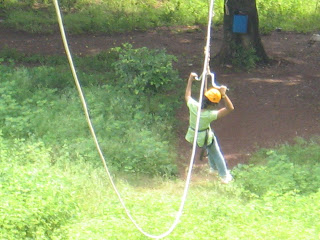 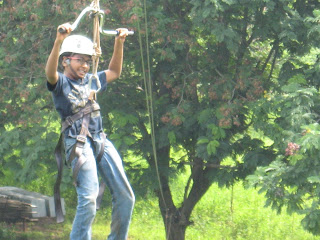 As I was sliding down I heard one of the 'activists' (the commando type chaps who help us with the activities tell another frightened soul "See even that sir is able to slide down." I could not go back up to throttle the chap so I slid down rapidly.

Back to the machaan, some more gay times, a fine lunch and we returned, tired and exhausted but surely, content.


Fine place and well recommended. It has a website http://www.deccantrails.com
Posted by Harimohan at 10:54 AM

Reminds me of the tempting tents at Kurubhgad near Karwar!

Raja, I think this one scores over on proximity, food and activities. No beach and stuff though and certainly the Kurumgad views of the Arabian Sea do not compare.