I am glad I visited the Aga Khan palace this trip now, when I am more aware of Indian history (and even more in awe) than a photo clicking tourist that I might have been a few years ago.
Also known as the Gandhi National Memorial this magnificent palace was built by the 3rd Agakhan Sultan Mohammad Shah Aga Khan in 1892 to create employment for the famine struck people in and around Pune. Built over an area of 19 acres and a strong foundation of noble thought and philanthropy, the palace cost Rs. 12 lakh to build over a period of five years. A 1000 people were employed and paid full wages. The highly educated Aga Khan was the 48th spiritual head of the Khoja Ismaili religion, was the President of the All India Muslim League and promoter of progressive thought  among Muslims.
But the palace has a bigger history than that. After the Quit India Movement, Gandhi ji was placed under house arrest in this palace on August 9, 1942 with his wife Kasturba and his secretary Mahadev Desai. Before being released on May 6, 1944, Gandhi ji lost both his wife and secretary - both died while at the Aga Khan palace due to illness. Of great national importance, the Aga Khan palace was donated to the Gandhi National Memorial Society by the 4th Aga Khan in 1969. 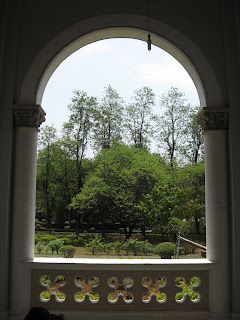 Located on the Nagar Road, Pune, the palace is a beautiful work of architecture with large spaces and high ceilings. The gardens are well kept and green and offer much shade. Apart from marveling at the structure, the maintenance, the gardens etc, one can dip into history and walk the spaces that were walked by great men. There are many precious pictures, the room where Mahadev Desai lived and died, the room where Gandhi and Kasturba lived, with their personal articles. Moving on further we can see the samadhis of Kasturba and Mahadev Desai and a place where a part of Gandhi's ashes are kept. It inspires me to now visit Sabarmati ashram sometime.
Among the people who inspire and awe me with their deeds and conviction in their thoughts, Gandhi ranks high. To do what he has done, to inspire lakhs to follow the path that he considered right, the path of non-violence (against others), of love and self reliance, of steadfastness in the face of odds, of sacrifice and truth, of strict discipline and the highest principles, of equality for all, of tolerance, of constant search for truth and much more, Gandhi ranks as one of the most courageous people the world has seen. How can anyone have so much conviction to spread peace, love and forgiveness to people who have lost their all is something I cannot imagine. But he held on to his belief and his conviction when the stakes were the highest, when all seemed lost.
From the Aga Khans, 3 and 4, their wonderful gestures in constructing the palace and in donating it, the architecture, and mostly the history it contains, a visit to the Aga Khan palace is a must visit when in Pune.