No trip to Warangal can be complete without stopping by at my old school, St. Gabriel's Boys High School of the Montfort Brothers. I joined the school in the 5th class (1975) after doing my fourth at Fatima Girls High School. For some reason St. Gabriel's only took in students from their 5th class and luckily for us, Fatima Girls would allow boys to study till the 4th. I went first and then Ram joined me.

Being my first experience in an all boys school St. Gabriel's was a wake up call. The boys were a mix of kids from the neighbouring railway colonies, boys who came from Hanamkonda (like me and my brother Ram) and some even coming from as far as Warangal. All kinds - the gentle sardar who father owned a store, Sarma whose father worked in insurance, the kid who came and relieved me of all my marbles one day, so many more.

There were many Anglo Indian boys who came from the railway colonies and they were rough kids who were always up to some trouble or the other. But they were good at sports and were good fun.
We had large grounds right outside the school and I dreamed of playing cricket on those grounds. In fact there were Inter house cricket tournaments once and I remember watching my seniors Shukla and Raghu whack the cricket ball hard with great admiration in my eyes.
It was to me a replay of Tom Brown's School Days. The railway tracks nearby on which we'd go for walks when we were in our seventh, the hostel where my good friend Koteshwar Rao stayed, the table tennis table and games in the brother's quarters, the library, the school grounds, the water taps, it was heady stuff.
I was growing up then on a fine diet of Enid Blytons and Hardy Boys, Hugo Montenegro and English films that came to town - like the Towering Inferno.
We had a cricket team that practiced and I was picked for it as an off spinner but we never played a game despite promises by Bro. Joseph that we'd play St. Paul's some day.
Watching the Fatima girls walk past, perhaps gazing longingly at some of our ex-class mates too, playing football in the grounds, taking the bus to and fro Water Tank to school, well it was all part of the good old days.
The delicate David sir who was our class teacher in the VII th and to whom I addressed a letter after I moved to Hyderabad (which he apparently read out in the class), Bro. M.K. Joseph who was tall and handsome and taught us Social Studies, the loud and lecherous Anand sir who told us about the nude sadhus at the Kumbh mela and who apparently had something going with one colleague of his, my good friends Koti, Sarma, Sreenu and Ramana, Sunil and Anil, Lloyd the terrifying Anglo Indian, Lester and Richard who played cricket with us, and Bro. Vincent who was our Principal then.
I hated leaving St. Gabriel's when Dad got transferred and Ram and I went on long protests but it did not work. We even offered to stay in the hostel.

But what totally knocked me over were the boards that were put up on the walls of the corridor about what children feel and how they should be treated. 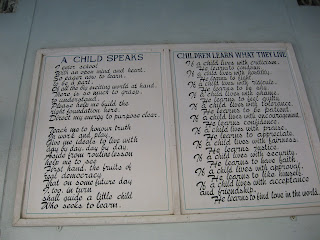 Knowing the Montfort brothers as I did the major part of my schooling with them in Warangal first and then All Saints at Hyderabad, and knowing such wonderful teachers such as Bro. K.M. Joseph. Bro. M.K. Joseph, Bro. Vincent and others to name a few, one can expect no less. 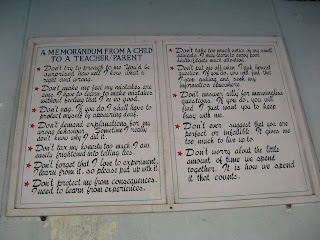 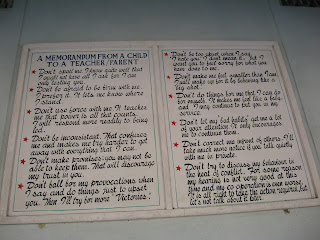 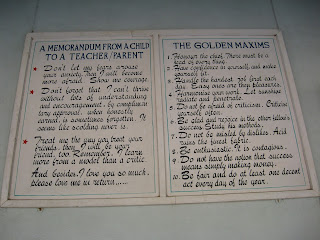 For all the good times and the wonderful lessons, for growing us up so well and shaping what we are today in so many ways, a huge thank you to St. Gabriel's High School, the Montfort brothers and all my teachers and friends. It was great fun guys.
Posted by Harimohan at 5:20 PM

Dear Hari,
Greetings from Rome. Unfortunately, only today I opened my mail. Normally, I do not use yahoo. I am a google guy! my google id
>bkmj2013@gmail.com<
I loved reading your piece on St. Gabriel's.While reading. nostalgic feelings welled up in me. After all, I am also a former student of the school. When I saw in your photos, the corridors of the school,the corridors of my memory reverberated with forgotten memories, come alive.

Thanks Brother. It was a wonderful trip down memory lane. I am so glad I went there.