This one is a must watch. A least three of the four films are simply out of the world. Dibakar Banerjee, Anurag Kashyap and Zoya Akhthar soar high in this anthology of short films celebrating 100 years of Indian cinema. The one by Karan Johar falls flat and I didn't know what it was all about. 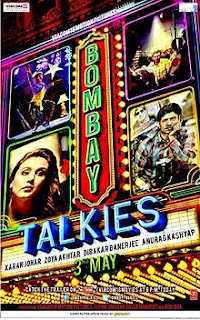 So thankfully we start with Karana Johar's movie about a young gay man who befriends his boss Gayatri and then hits on her husband. Turns out that the husband is also a closet gay. The two kiss - Randeep Hooda must get an award for kissing a man - and then beat each other up. What's it about? Do they love one another or do they not? Everyone is finally upset for some reason - the two men and the one middle aged woman. What were you trying to say KJ?

Now that's over we can sit back.

Dibakar Banerjee's story of a stage actor in Bombay, who gets a bit role in a movie with Ranbir quite fortuitously when he is pulled out of the crowd is stuff that makes you want to see it again and again. Nawazuddin Siddiqui as the once-upon-a-time actor, failed businessman, breeder of a single emu, and aspiring watchman, who perfects that shot of brushing past the hero inspired by a vision of his guru (regional newspaper, glasses and a superbly improvised 'Aye'). It is sheer ecstasy to watch the shot where he dramatises his story to his ailing daughter and she goes to sleep smiling. Fantastic stuff and one of those stories I will not forget. Ah, what can one not achieve if one aspires for excellence! Brilliant, brilliant, brilliant.

Zoya Akhthar's story of a young boy who loves dancing but who is forced by his father to toughen up, is sensitive and uplifting. Follow your dream says Katrina Kaif and the young boy does and the story culminates superbly when we see the boy transform from his awkward posture into a graceful dancer throwing off energy all around. Brilliant stuff again.

Anurag Kashyap brings Vijay from Allahabad with one murabba that his ailing father wants Amitabh Bachchan to take a bite from - so he can eat the other half and live long. Vijay discovers soon that its not as easy as he thought to get Amitabh to eat his murabba. Will he meet the superstar and get him to eat the murabba and will the blessed murabba heal his ailing father? Ah, bitter sweet, and leaves you laughing at yourself, at the frailty of our existence, our hopes, our emotions and desires.

Indian cinema is in good hands and I am really glad I am in these times. What amazing talent we have here and what a melting pot of creative excellence. Delicious. I just can't get to see more of the stuff that Dibakar Banerjee, Anurag Kashyap and Zoya Akhthar make. KJ, sorry man, you don't belong in this company - not with that short film anyway.