When I first heard that Metallica was to play in Bangalore my first reaction was 'Let's see this'. I listened to Metallica's first big hit album with 'Enter Sandman', 'Nothing else matters'. 'Wherever I may roam', 'The Unforgiven' almost two decades ago as a twenty something and was deeply impressed with it. I had marked out the band as one of those to watch out for and bought the next few albums (then in cassettes) and did not find those encouraging. I gave up, and returned to a life without Metallica. But tribute enough that in my rock playlist on my ipod, Metallica's major numbers have pride of place. 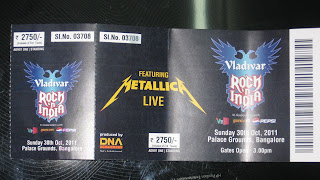 Why go to a rock concert at 40 plus? Because its the best time to go to a rock concert. Anyway between my indecision and the lack of enthusiasm on the part of some other 40+ members (like Kiri who seems to have other forms of adrenaline rushes these days), and then by a few 20+ members too, I gave up. It was only because I had committed to ride with Hari Rao to Bangalore that I went and guess what - a day before I run into Anirudh who says he has a spare ticket and hands it to me. I was set.

Why is 40+ the best time to go for concerts? Because you can do it in a more relaxed fashion. I remember the time we went for the Roger Waters show and the Bryan Adams show we were there when the gates opened at 3 p.m. Which meant that we were in the main arena at 430 or 5 and then waited longer for the first act to come and then another and then finally the main act at 8 p.m. and we were standing almost 7 hours or more. This time I was prepared. I watched the F1 action on the television and loved it. And at 6 p.m. I set out to the Palace Grounds thanks to my host Rajesh who offered to drop me. 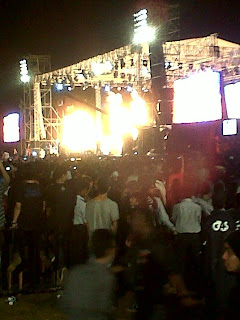 One could see youngsters in black t shirts snaking their way towards the Palace Grounds. I hopped off outside the gate from Rajesh's car and walked in. Lots of twenty somethings were all going in. I saw some fake lines (queues) that had fooled me earlier and this time I decided to go to the next entry point to check. As i suspected there were no queues. It is amazing how we never queue up when there is a queue and how we queue up when there is none. Just the fact that there were so many people seemed to have made some people queue up on their own. Anyway, we moved in past the first point, then the second and then we were in. About twenty people checked my pants pockets, none checked the jacket I was wearing and none checked the shoes where everyone who goes to concerts conceals the booze, cigarettes and other agricultural produce one requires for concerts. But it was thousands of black t shirts - 90 percent in the 18-25 age group (where did they get the money, the ticket was Rs. 2750), some in the 30-40 and 1 % in the above 40 crowd. But all, toddlers to the seventy year old I saw, were dancing and swaying.

The early rain caught everyone by surprise but I had come prepared with a jacket that saved me a bit and I hung on to the barricade at the end of the first section. The ground was split into three - the first for the completely young and crazy, the second for the ones who want a bit of a space but also a view of the stage and the third who want to sit or lie down and listen to the music or see that videos on the big screens. An English group played and then the rain went away. I could see youngsters totally smashed, some reeking of alcohol, some who were already out before the concert. The sweet smell of agricultural produce stuffed into cigarettes hung about like a cloud all through and one would get high just being there and inhaling it. Metallica came on at 8 p.m. after an elaborate arrangement to ensure safety of the fans.

Once they came on it was all mayhem as the decibels grew to a level that hit you hard in the gut, the music soared to another level. Hetfield, Ulrich, Kirk Hammett on the guitar and Robert Trujillo played out 'Nothing else matters', 'Wherever I May Roam' , 'Enter Sandman', 'For Whom the Bell Tolls' , 'Seek and Destroy' , 'Master of Puppets' , 'Of Wolf And Man' , 'Creeping Death' , 'Cyanide' and some songs I did not get. They performed energetically, non-stop for two hours. The erupting flames at the back stage were about the only visual aid they took recourse to and the fireworks in the sky at another time. Apart from that and moving to the elevated stage the band stuck to playing music that they expressed best without any aids. I left at 10, after a good two hours of thorough enjoyment, when the band was playing some cover versions to those groups that inspired them, and carefully made my way out of the muck and mud.

Looking around one could see that a few fans knew all the songs but a majority had no clue of the songs, not even the popular numbers. But they had a good time, you cannot not have a good time with such an elaborate show and such a big group, despite the rain. There were a couple of magic moments when the crowd got into the act and sang for a full five minutes compelling Hetfield to genuinely exclaim - Bangalore I love you. There were 1000 police they say, for a crowd that was in excess of 20000, by far the largest I have seen.

Though there were some of my friends in the crowd I decided to watch it myself. And that was a good decision because I enjoyed watching the show by myself, ensconced by a group of youngsters who were a joy to watch as they sang every song, one girl in particular, enjoying herself to the exclusion of everything else. My only problem was that apart from their big classics I had not heard much so about half the songs were unknown. But then Metallica also does not have such a big body of work, good work, so no complaints. But they were professional, highly energetic and had the crowd eating out of their hand.

People in all kinds of attire, of all ages, of all sizes and shapes, foreigners, Indians, music lovers, fun lovers, old people dancing, young people screaming, the energy was infectious. One must go to concerts for just that. To get a dose of life. I guess I will make it to other concerts as well.
Posted by Harimohan at 4:14 PM

You drove all the way to bangalore for a concert. Wow wish i were there.

Yes Madhav man. Good fun. Propose to do it in future also so you're welcome aboard.