This is rather old news but I could not put this post up because I did not have the pics which is what this whole post is about. I was at Adarsh Vista, a fine little gated community in Bangalore on Halloween Day, visiting our good friends Vandana and Ramesh. Now Adarsh Vista is inhabited by several expats and many more Indians who have returned from the USA and most celebrate Halloween with a lot of enthusiasm.

Frankly I was not particularly enthused by all that was happening and tried to keep on the fringe while Anjali and Shehan dressed up as a witch and a Ninja fighter respectively and went trick or treating. I stayed at home and handed out some candy and stuff to children who landed up at the door and rang the bell and probably got more scared than I was at their costumes. Not having been exposed to the Halloween concept I was wondering why it was such a big thing these days. Even schools have it. 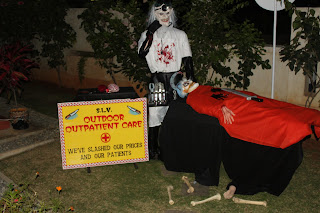 But it was only later when Vandana took us across to the house of an expat neighbour when I saw the thought, preparation and fun that goes into this festival. I truly admired the spirit in which they prepared for the party and all the little thoughtful things they did to make it a lovely time for all who visited them. There were two live ghosts or ghouls (later revealed that one ghost was the host and the other the driver who sportingly wore the ghoulish dress).

The pics are enough to say more than words can ever do and I must say, I truly fell in love with the entire experience. I congratulated the owners and asked if I could share the experience on my blog and she (the host was not willing to come out of the ghost character) was more than gracious and agreed, and Vandana shared the pics. So here they are.

I returned home and quickly looked up the net on what this Halloween was all about. Apparently its short for 'All Hallows’ Evening' or 'All Hallows' Eve' and is observed every year on October 31 (before All Saints' Day). It appears that they seem to be honouring the dead by dressing up as dead people or ghosts but having fun while doing it. 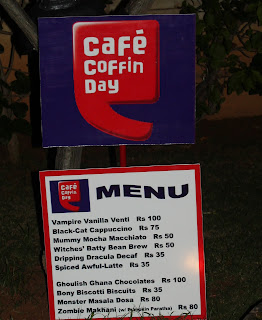 So the kids go trick-or-treating dressed up in cute costumes, jack-o'-lanterns are carved from pumpkins, bonfires are lit, and scaring people in one way or another including telling scary stories and watching horror films. 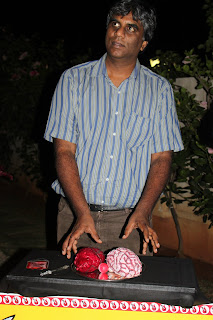 The kids were scared enough and did not enter this house though all adults loved it. And the next year I shall certainly view this festival differently and also share this experience with others too. But if you are in the vicinity of Adarsh Vista next October 31, it might be worth dropping in to see this wonderful couple and their magnificent Halloween party!
Posted by Harimohan at 10:24 PM