I met Srini Alluri when Sinivas Bulusu, an old acquaintance of mine, called me one day and asked if I would be interested in helping in the writing of a book on a cycling expedition. The person who had undertaken this expedition from London to Srinagar, a distance of 11,350 kms in 109 days, covering 14 countries along the way, was Srini Alluri, the 38 year old CEO of a software company Sandhata.com and a friend of Srinivas. The stats he reeled off shook me up and I wondered why anyone would do such a thing. I can understand cycling long distances over a long period of time as an exploratory trip but 11,350 kms in 109 days is almost 100 kms a day! It was when saw the 'cycling for humanity' site and blog (http://www.cyclingforhumanity.org/) that it struck me that this incredibly demanding and dangerous adventure had a purpose. But I had to know more because this was not just about cycling nor about the awareness - there seemed to be much more. It all seemed to centre around Srini's NGO www.manavata.org' which is Telugu for 'Humanity'. 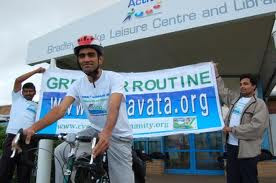 So I coaxed the highly efficient and competent Gowri Bhavadas who does a wonderful job of writing to take up the project of helping with the writing and promised to help her to the extent that I can. I was pretty keen on knowing more about Srini which is one reason why I went along with Gowri for the first meeting - one to assess the job and two to learn more. In a sparse, low key office that works out of a residential building sat Srini, who at first sight looks like a cyclist, because of his thin frame, certainly showing the after effects of the arduous journey he had undertaken not too long ago. But he is incredibly alert, almost hawk-like, very healthy and energetic. He is also very polite, has a boyish smile and is of an indeterminate age. As his office, so is Srini, as he dresses in spartan clothes, serves water in steel glasses, does not use electricity any more than required and so on. He cycles to work. 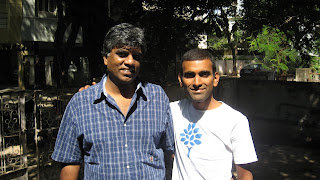 For someone who comes from Lolla, a small village in East Godavari district, and born to parents who were farmers, Srini has come a long way. And if one hears him, one knows that he has a long way to go too - such are his ambitions, ideals and goals. Brought up on the ideals and wisdom of his parents, books like the Gita, Mahabaharata and Ramayana, young Srini learnt yoga, the right way of living and decided to put his life to good use. His purpose - to serve others, to make people live the 3H way (healthy, happy and harmonious), to make people aware of living in harmony with one another and with nature. He helped his parents, studied, served others and did all his duties to the best he could from a young age, not accepting any limitations. Not for him time wasting activities such as movies and loitering around - he was fully focused on making this a better world. At a tender age of 16 he started his organization 'Chaitanya Bharathi Youth Association' in his village and took up social work like building a bus shelter, getting hand pumps for water and so on. The activities carried on into other areas. Srini completed his B.Sc. Electronics and MCA from Ramachandrapuram and came to Hyderabad where he became an expert programmer. Jobs, setting up his own firm Advanced Computer Solutions (ACS) now managed by his younger brother Prakash, more jobs, exposure and then his second firm Sandhata.com, which is based in the UK as well, travel round the world professionally - nothing swayed him from the original passion - to serve others. So continued his NGO manavata.org which now boasts of 7000 members in 11 countries, spreading awareness about the 3H way of life. 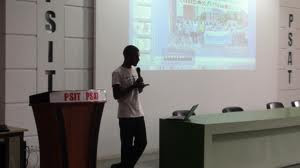 The journey had a few small precedents or trial runs. Srini did smaller cycling expeditions - Bangalore-Hyderabad, Udaipur-Mumbai and other smaller ones (he alwasy cycled to school college and to work and still does) but he decided to do something that would touch almost 2.5 million people (based on the thought that one takes 2.5 million breaths in 100 days!). So the big one. 500 volunteers got involved, arranged 500 events along the way, as Srini started from London on June 25, 2011 and traversed through a route that was to originally go through UK, France, Germany, Serbia, Slovakia, Belgium, Luxemburg, Austria, Slovakia, Hungary, Serbia, Macedonia, Greece, Turkey, Iran and Pakistan before entering India. He hoped to create awareness and bring a positive change in the attitude of the common man, to integrate like-minded people for a humanitarian cause and to motivate youth towards social responsibility. Apart from cycling there were charity events, health &environmental awareness, medical camps, planting of at least 1,00,000 saplings, personality development sessions in universities and volunteering with regional charities.

Before the journey Srini spoke to many experts who had undertaken such long journeys before and that included Mark Beaumont (author of ‘The Man Who cycled the world), John & Selly, Jon Slade who had cycled Alaska to Mexico last year. The bike he chose was a Daws Galaxy touring cycle with 27 gears. It is a fascinating experience as one can read in his blog cyclingforhumanity - lonely rides, unfriendly terrain, harsh weather, hilly terrain and so many more issues. And tales of humanity reaching out for him, the warmth of people, strangers, cyclist whom he met travelling the world like him, animals, hosility - its wonderful stuff. But driven by his burning need to make a difference to humanity (you must meet him to understand how deeply he believes in his cause and purpose, I have not seen anyone who has such high standards for himself), Srini pushed through the journey on time. Unfortunately due to Pakistan not giving the VISA he had to stop at Iran, fly to Thiruvanantapuram and take up the second leg of cycling from Kanya Kumari to Srinagar. Total distance covered - 11,350 in 109 days.

It is probably typical of Srini that this event did not get the publicity it could have got but I am amazed at what a man can do if he believes in a higher purpose. I am amazed and inspired at his single minded focus to serve humanity. 'Cycling is not a passion,' he says simply. 'It is just a means of transport that I use to spread awareness.' His day starts at 430 a.a. with yoga and meditation, his NGO runs three ashrams with orphans and the disabled, he conducts Personality Development Programs regularly, plans to plant 10,000 saplings, adopt 500 villages, conducts blood donation camps and oh so many more. Whatever he does in his life, and I think Srini has aready done a lot, will make a big impact as he works in rural areas a lot, Srini Alluri, you are doing a magnificent job and I wish you the very best in this long journey and hard route you have chosen. If anything, you have inspired me to adopt the 3H lifestyle, perhaps cycle more often and live within my means. Mostly, to serve humanity and live in peace with nature. I will certainly mention your wonderful effort in my talks and of the path you have chosen that we could all emulate. Wonderful work Srini and you can always count on my support for your activities.

But this is only the tip of the iceberg. I am sure there is more to Srini than I have mentioned. I will follow this blog up with more information later.
Posted by Harimohan at 10:59 PM