The Misfit - Ready to Go

And so one almost year after the long chat I had with my good friend and editor Keerti Ramachandra on whether 'The Misfit' has a story worth publishing, getting a positive response from her, noting down the changes that Keerti said might improve the presentation and getting back to Hyderabad and pondering over the same as it meddled with my mind, I finally got the Misfit to a shape where I feel it is under control. It is probably in the best shape I have seen over the last 12 years and believe me, I saw it many hundreds of times, tinkered with it and wrote and rewrote it. There could be another 10% improvement (or more) but it is now a manageable animal and I know it now. 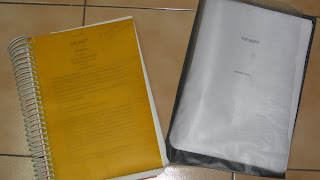 Having started writing it with no structure and just a whim, as an amateur wannabe novelis,t and having started writing also about nothing more than a feeling, of discomfort, 'The Misfit' is easily the toughest for me to change, write or rewrite because I feel trapped in it. It has an unconventional structure, an unconventional story and the one thing going for it is the honest effort I put into it. And it is the only thing that will sustain it.

In its earlier avatar it appealed to youngsters for it is about four young men and the ones who read it liked it. In the current avatar I hope it may still appeal to them and perhaps more. But first the rounds of publishers and all that before we get anywhere close to all that.


But for now, after innumerable edits, versions, the manuscript now stands at 212 pages, 84, 330 words. Tomorrow it should be off to Keerti again and I shall get her feedback on this before I pitch it forward. The last few days have been crazy as I tried to get it done to satisfaction and I finally have. It is a fine feeling and I think I will now relax with a cup of well deserved chai, my feet off the ground. Nothing is more satisfying than a job completed to satisfaction. And with the Misfit, it is more so as it is my first.
Posted by Harimohan at 11:34 PM

It is a case of the first born arriving a little later, eh? Good luck! Look forward to the new avatar of the idea.

Yes Raja, it's been a long time since you read the first draft in Harihar - 13 years or more- but I am glad it did not get published then. In retrospect it was too raw then. It feels more fuller now, more depth. I know there is still a bit of work left but it is now under control. Keerti has it and I should be going down to meet her next weekend.

Given your experience, can you share your thoughts on the best way to come up with a screenplay?

Will look forward to your thoughts when you have a chance.

For the book one can just go ahead and write it and look for publishers. But here the issue is that one has to write the story down first which could take a while. Book writing as such is a long drawn process, publishing it even longer and getting to the movie guys after all. The money and stakes are much lower than movies.

In movies the stakes, money and visibility are much higher. If the idea is good, then all one needs is the general idea and not a whole story written down for a book.

For the screenplay one must register as a script writer/screenplay writer etc in the concerned film association (this is the Telugu industry experience from what I know). This process involves a nominal fee. Then one can submit a story, which is about 25-30 pages long with the general idea, tentative title, and register the same for a small fee of a few hundreds again. Once registered I guess the story/script is sort of protected against being stolen (I don't know how effective this is but that seems to be the idea).

If the person who has the idea has the confidence and clarity to write the script (as in a story line with enough detail to get the idea), he can approach producers who have made similar movies in the past with the story idea. If the producers like the general idea they may ask the same person to write the screenplay or they may buy the story and have the screenplay written by someone else. If the person can do the screenplay and also direct, even better. I think some people approach directors too but to my knowledge most directors write their own stories/screenplays.

In movies it is important to get the registrations and stuff for some protections since it is very competitive and good stories are difficult to get. The general idea can be changed and passed off as an inspired story. So it is best to deal with people who have a reputation of dealing scrupulously. This much to my knowledge as of now which is limited. If I have more to share I will add here again soon.

Thank you - very clear and logical. May be worth posting as a seperate post.

I had a quick back and forth with one of Gautham Menon's proteges about this topic. The suggestion was - if the ultimate goal was to develop a screenplay, then one should develop a good story and approach the producers. They would then work with it - and take it to next steps - and perhaps have another person do the screenplay. This was one of your suggestions as well.

Hi Anon,
Glad that I could be of help. Good luck with the idea - hope it becomes a wonderful story. We need some good ones.