Zero to One - Peter Thiel

The tag line - 'Notes on Startups or how to build the future' is what it is about. Thiel. promoter of PayPal along with very big names like Elon Musk and others, knows what he is talking about. He says build something that doe snot exist - that was zero - and take it to one. No incremental approaches, radical ones. 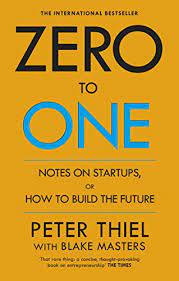 Startups, he says operate on the principle that you need to work with other people to get stuff done but you also need to stay smart enough so that you actually can. Which is true for most successful businesses I guess. Also, a startup is the largest group of people you can convince of a plan to build a different future.

One question he asks is - what important truth do very few people agree with you on?

- a bad plan is better than no plan

In a good start up, present value cash flows should be increasing.

The characteristics of a monopoly are

To be a successful startup he says, the last will be the first (as opposed to the coventional first moved advantage)

Thiel takes off on Gladwell and rightly so and says we must believe we can control the future and we must be definitely optimistic. With good design, careful planning, long term planning we can pretty much get what we want to achieve. He says we are not lottery tickets. I agree.

Where it comes to money Thiel says Venture Capitalists aim to identify, fund and profit from promising early stage companies. hey hope to get a cut of 20% of returns. The law they follow is to invest in companies that have the potential to return the value of the entire fund. Every single company in a good Venture portfolio must have the potential to succeed at a vast scale. So they make few investments.

Thiel says instead of picking anything and being good at it, you must focus relentlessly on something you're good at doing if its valuable for the future.

Thiel says there are Conventions, Secrets and Mysteries. Startups are about secrets. Why there are not enough secrets is because of incrementalism, risk aversion, complacency and flatness. He says there are secrets of nature and secrets of people.

When you uncover a secret he says don't tell everyrone. And to find secrets, look where no one else is looking.

When looking at founders, he says look for good co-founders who complement your skills, there must be a clear delineation of ownership, processes and control, who is off the bus and who is on it, and why equity makes immense sense.

The PayPal mafia was a happy bunch of co-conspirators he says who were happy together.

One way to figure how the startup works is

In the end he says sales is as important as the product.

Thiel leaves you with seven questions

1) Can you create breakthrough technology instead of incremental improvement? - engg question

3) Are you starting with a big share in a small market? - monopoly

5) Do you have a way to create and deliver your product? - distribution q

7) Have you identified a unique opportunity that others cannot see? - secret

Thiel says that most founders are eccentric. He lists a bunch of American royalties in the end.

Overall good stuff. I bought this because one potential coachee wanted coaching on startup and left me with the book. I think it makes sense in many ways. Go radical, go for secrets no one has uncovered, start small, get into a monopolistic situation, give importance to sales and think long term. Sound stuff. And glad he went after Gladwell because Gladwell does leave you with questions without any real solution.