2022. Directorial debut by Madhavan and a story that was worth telling. I do remember the scandal caused by Mariam Rasheeda's accusations and the ISRO scientist being accused of selling information in return for sexual favours - but as usual no one told later that the case was thrown out, Nambi Narayanan acquitted, that he got compensation and that he got a Padma Vibhushan. Even more interesting is that no one is being held accountable for the charges made and the damage caused not just to Nambi Narayanan and his family but to the space satellite program itself. One wonders how such flimsy charges can hold, how those who make such charges get away without any accountability. I also remember how the authorities has put out lurid details of the Talwar case and never substantiated any of it. So I am glad Meghna Gulzar made Arushi and Madhavan made Rocketry. As a directorial debut, handling such a sensitive and complex case, well done Madhavan.

I liked it. Worth watching certainly. Having watched Rocket Boys recently I am now up to date with our space program, with Homi Bhabha, Vikram Sarabhai. APJ Abdul Kalam and others. Thanks guys for making these and educating us! 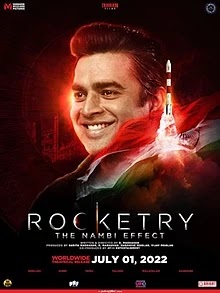