The title on, everything about this book was a let down for me. Primarily because I rate Pullela Gopichand a world class coach and one whose methods must be blindly copied by all sports federations in India on how to coach and produce champions. Take the template and simply follow it. Just that template in detail in the book would have been worth it for me. Also, I feel let down because I rate Priya Kumar very highly and feel she is an evolved person who has made an effort to really learn and understand life. I have been highly impressed by her book 'I Am Another You' and have all her other books on my shelf. Something went wrong in the execution and I am very disappointed. 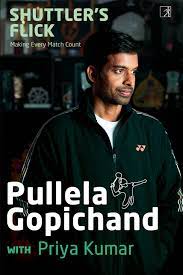 The structure of introducing an idea first in Priya's words and following it up with Gopi's words or another testimonial from players like Sindhu or Saina or others in the eco system is fine but there's just not enough meat. It skims through it all - passion, early days, eco system, making of a champ, comeback. On one hand I did not get enough information on his life, who were his friends, what would he do (in all fairness, from what I read, he did not seem to do much else other than play badminton, do yoga, train, meditate, coach - single mindedness in purpose) - but there's still stuff about him I'd like to know like the Chanakya video - that was an insight into his mind. So that's the stuff he watches. But who would he discuss these things with - some soundboard, someone who he learned from, some books, teachers. I would have liked to know more of him from others who knew him as a child, as a champion in the making, how they saw his transformation. What makes him laugh, happy, sad, peaceful. What does he enjoy. Why Art of Living. Stuff like that.

That's stuff I can probably still get from other sources but what I really looked for and did not get was the detailing into his coaching regimen, his coaching philosophies, his template to produce champions and where we are lacking, his vision for the future, his insights into how he developed the training methods, how to scale it up, how to make more Gopis and Sindhus and Sainas. Like when you talk of a strict diet, I get that one follows a tough diet and we all read about Sindhu eating an ice cream after several months or something like that after Rio - but what was actually on her menu and why, do all champs train that way, did Gopi train that way, how does it help etc. Like I remember Virat Kohli saying when he first followed a strict diet he felt  like eating bed sheets after a few weeks - that gives me an insight on how tough it is. Or this ultraman who used to shave off his cottage cheese to reduce calories after running some 40 km,swimming some 10 km and cycling some 50 km or something like that - that gives me an insight. How does keeping a phone away help, how dangerous are distractions - like I remember a story of a boxer who fixed up an urgent meeting with his mental training coach because he had a single negative thought during training - that's enough to lose he says. More specific examples of the how, of live examples before us would have inspired many a coach, player and parent. Definitely would have educated me much more.

But those issues apart I am glad they did bring a book out about him and perhaps another read would give me more information than what I gleaned from this read. Many aspects such as process orientation, adapting to his trainee needs, diligence and hard work, a tough work ethic, success being the journey and not the end, money, the parent trap, expectations, importance of values come through well. Gopi's journey to become a coach, his struggle to build his academy, the help from the government, from people such as Chamundeshwarnath and Nimmagadda Prasad has been duly noted. Fantastic journey and I am so proud and happy for him.

One layer below and I feel it would have been a brilliant book. The subject is a legend of whom you could write tons, the writer is gifted and proven - where did the editor miss the trick?

Posted by Harimohan at 8:03 PM