UBI - Make Up Your Mind

My dear old Andhra Bank now has become UBI. One feature of Andhra Bank was that none of their ATMs worked so we would draw from all other ATMs. But since a few months AB has become UBI and it does not like us going to other ATMs. So each time go to another ATM I get a message from UBI like a jealous girlfriend - don't go, I'll charge you etc. 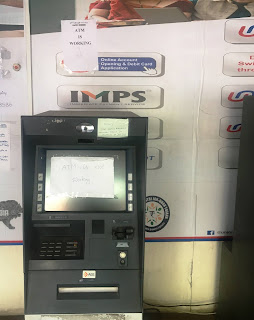 But what t do? Most dn't work. Like this one in our colony. It cannot make up its mind whether its working or not. There's a paper on top which said 'it is working' And another on its face that said 'It's not working'. The ATM is not working from what I saw. Maybe two people had a fight. One saying it should work and one saying it should not! Maybe the ATM cannot make up its mind!

I don't know. I came away and went to another ATM. I got that message again - like a jealous girl friend. What does one do?

Posted by Harimohan at 3:36 PM