The graphic novel is Marjane Satrapi's account of her life in Teheran in the 70s when it transformed from a free society into a repressive one controlled by religious fundamentalists who imposed all kinds of moral codes on people - dress, music, dance partying, expression - were all curbed and directed by force. 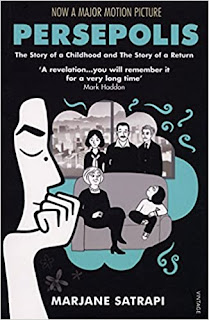 Marjane's parents are free thinking people and they grow their only daughter to question and speak her mind and live on her terms. Marjane's outspokenness and fearlessness gets her into trouble but she does live life on her terms - telling the Principal of her school off and rebelling in small ways. The war with Iraq, the bombing and the increasing danger to their lives makes her parents send her away to study in Austria when she is fourteen. Marjane adjusts to life as an immigrant, but continues to live in her own ways. Growing up pains, boy friends, cultural differences have their effect and she hangs out with a bunch of nihilists smoking pot and finally ends up homeless after fighting with her boyfriend and almost everyone else.

She manages to get back to Teheran and after battling her bouts of depression where she becomes distinctly anti-social and suicidal, turns around, becomes an aerobic instructor and becomes social again. This time they rebel against the regime in their own ways (holding parties and getting arrested), meets friends who have been to war, sees friends leave to the US and meets a man she marries. They do each other some good but the marriage does not last. All this by the time she is twenty one. And then her mother and father send her off to Europe again, where she plans to study and do something to make her family proud. And she did - thanks to this novel which is now a major motion picture.

I completely enjoyed it. I somehow find this connection with the Iranians - maybe because of our Irani cafes, many schoolmates and college mates had Irani roots, the wonderful Irani films I saw - and it was fascinating to read her account. That it was also around the time I grew up helped to relate - Kim Wilde, Iron Maiden - parties and so on. A book that expands you. Must read.

Posted by Harimohan at 3:29 AM