Nine stories based on the nine emotions or rasas - compassion, romance, anger, disgust, laughter, wonder, peace, fear and valour. I liked the format because I can watch it one short story at a time. Nicely shot and done. And of course so many well known names of artists and technicians you have something going all the time. 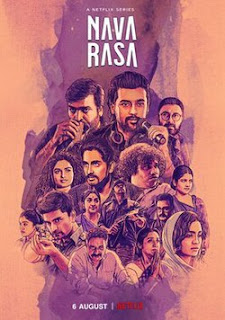 Compassion is about a wife who forgives a stranger who killed her husband - who are we to forgive when we have not spoke to each other for ten years she says. Romance is a story about a successful musician who meets the love of his life - or someone who inspires him - and then fades away. Anger is felt by two siblings against their mother for compromising her values to give them a better life. Disgust is felt by a daughter against her father who holds grudges against everyone - his successful nephew mostly and tries to spoil the marriage feast on some trivial excuse. Laughter comes form the village prankster who tries to help his headmaster and ends up messing it up some more. Wonder is about a scientist who creates something and delivers it into the wrong hands. Peace is found in war - the LTTE fighters help a boy get his pet dog back and in a moment of madness - the peace that they found is lost. Fear is about a lady whose ghosts from the past come to haunt her. Valour is about a rookie commando who captures and loses the head of a naxalite band and then plunges in to capture him - in a moment of inspiration.

Nice stories and well told. Sometimes I felt the exact opposite emotion of what the story was about or did not feel it in the way it was meant to be. Like in peace I want to feel peaceful by the end of the story and not the opposite of it. I liked valour, the idea behind romance though I am not sure it got captured well, disgust, laughter and compassion.