These are those stories you pick up from someone, some book, some where. But they drive your story. 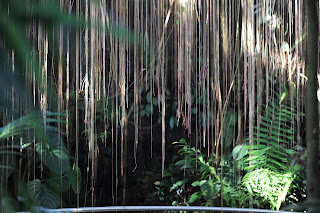 1) The shark story: A restaurant serves the best sushi. Customers love it. They expand business. But customers complain about the taste. Some thing's missing. The restaurant tells the fishermen get the fish alive from the deep sea. The fishermen make a small pool on the trawler to keep the fish alive. Still the customers complain. Then they hit upon an idea and introduce a shark in that pool. The taste is back.
We need a shark in our life to keep us fully alive. What's yours?

3) The jack story: Chap is stranded in the middle of the night in the middle of nowhere with a flat tire and no jack. He sees a distant light and heads there to ask for a jack. As he goes towards the house starts imagining how the house owner might not respond well when he opens the door. He works himself up into a state - if the owner is rude to me I'll tell him I don't need his jack. When the owner opens the door and says 'Yes'? our man screams - 'I don't need your jack' and walks away.
Don't over imagine things and mess them up for yourself. Take responsibility for what you do and let the others do their stuff!

4) The antique furniture story (Roald Dahl): An old con tries to con two dumb farmers into selling their priceless antique furniture for a throwaway price telling them that he wanted to use it for firewood. Thrilled at having bought the priceless antiques for the price of firewood he returns with his cart only to find that the boys had helped him for his generosity. They have chopped the furniture up for him.
The good god has his ways.

5) The boy who donates blood (Chicken soup): Young boy is asked to donate blood for his ailing sister. He agrees and asks after a while, "what will happen to me after all the blood is taken out? when will I die?' he asks. Courage in the face of such innocence.
When you have to give, give. And when you communicate, put yourself in their shoes.

6) The man and his kids (Chicken soup): The man takes his kids to the circus at full price and introduces them to the turnstile man as the lawyer, the doctor and the engineer. See the potential and they will be that.

7) The lady whose husband dies: Lady gets news that her husband of many years has died and is secretly happy at her release from her boring husband. She hides her happiness by locking herself in her room while the doctor and others fear for her weak heart. Then comes the news that the husband is alive. The lady dies this time. The doctor concludes that the lady could not handle such happiness. Amazing irony. But that's life.

8) Zen master and knowledge: Zen master is asked by a disciple to teach him knowledge. After a year of waiting the disciple asks the master when he will teach him. The master holds the disciples head under water until he almost dies and then lets go. When the disciple heads up for a breath of air, he understands when he will attain knowledge.
You desire something really bad, you will get it. Don't keep asking, do it.

9) Zen master and the lady: Old master carries the lady and drops her across the lake . The young monk is upset. Old man tells him he left the lady at the bank but the young man is still carrying her.
Put that judgment down now.

10) Birbal and Akbar: Akbar gets hurt and Birbal says it's all for his good. Akbar gets angry and gets him thrown in jail. A little further Akbar is captured by some tribals who want to offer him as human sacrifice. They see his wound and let him go as he is not fit for sacrifice. Akbar realises the wisdom of Birbal's words and releases him. He asks him how being in jail was good for him. Birbal says else he would have been sacrificed.
Truly there is a gift in every misfortune.

and there must be some more surely. Let me think.
Posted by Harimohan at 2:44 PM