A 2000 movie on drugs that moves between Mexico and the USA. It shows various sub plots running simultaneously - and all of them don't meet as in most such movies. So there's a US government official who is out to snuff out the drug issue, his daughter who is a drug addict, a Mexican police duo trying to snare a drug lord, a drug lord who is caught leaving his wife in a jam...ummm that just about covers it. Almost. 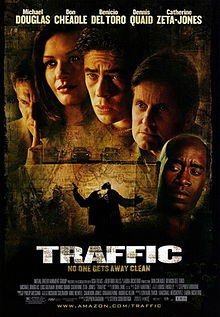 It's a bit too complex to explain so let it lie there. In the end, if we take a head count, one half of the policeman teams gets killed, the daughter goes through hell and back, the drug lords wife secures his release and gets his witness killed. All is not well in the end but there is no end to drug stories. Certainly no happy endings. But I forgot to mention that this movie has a star cast that makes you sit up - Michael Douglas, Catherine Zeta Jones, Ben Del Toro, Dennis Quaid etc.

Posted by Harimohan at 1:04 AM