Thought for the Day - How We Lose Our Godselves

I was reading a book recently and it talked about how the godself within you will take care of everything and how I can let go. It suddenly struck me then - how when I was a kid I somehow believed I was god. I think I did for a long time and was so secure in the knowledge that since I was god nothing could ever happen to me. Those were the happiest days of my life - save a couple of incidents when some idiots came and messed with my heaven. 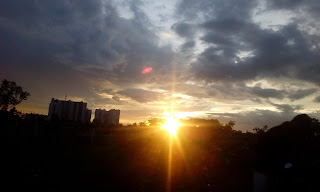 But then, when I look back in retrospect, I can see how that godself started leaking away. Little by little, a new thought, a fear, a negative belief, started creeping in. As they took up space, the godself obviously was pushed out, or pushed into a corner. Over time of course, all I had inside me was just me and these fears, beliefs and stuff and no sign of my good ol godself to rely on. I had to fight alone.

When I read that line I realised suddenly that the godself was right there somewhere. The fact that I was alive was proof of that. That we are all born out of that state of fullness, completeness and we slowly let it leak away when we believe an alternate truth - almost as if to challenge the godself and say 'hey, I can do this by myself you know, I am big enough now'.. If like a madman or an innocent child, I had held on to that godself, I did not have to fight the battle alone.

It's comforting to know that a godself exists inside. That when I nurture and grow that godself I have nothing to fear. That I feel good enough, feel worthy enough. You can't not be good enough when you're dealing with the godself.
Posted by Harimohan at 12:53 AM

Labels: Cricket, Thought for the day