While cleaning out Anjali's shelves yesterday we found many old outdated notebooks and scrapbooks from the past two years. She sifted through them and discarded some and kept some. While sifting she found a note hidden in one of the old notebooks. 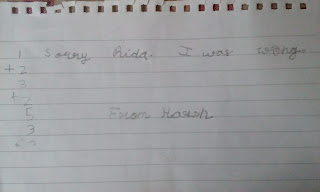 Shobha asked her what it was about. So Anjali told us the story behind that note.

'You know one day Harsh and Rida (her friends in school) had a fight. They  stopped speaking to one another. So Mansi told me - Anjali you can write cursive writing like Harsh so why don't you write a note apologising to Rida and write another note from Rida apologising to Harsh. So we took a paper and cut it into two and one piece I wrote to Rida and on another I wrote to Harsh. Then we quietly slipped the notes in their bags as if each one had written to the other.'

'It didn't work,' said Anjali laughing embarrassedly. 'Rida said she knew it was not Harsh's handwriting. She asked who else knows how to write cursive. That was two years ago when I was in the second class so not many knew cursive writing. She finally found out that it was me who wrote that note.'

'Then what happened?' I asked.
'Then we told Rida to forgive us,' said Anjali contritely.
'Oh,' I said envisaging a sad end.
Anjali perked up after that.
''Then you know what happened? Rida told us it's ok, I will myself write a note to him and will also make a paper rose that akka taught me. Rida said she would put her real note in Harsh's bag.'

Whoa, that's some twist in the tale. I was pretty excited now and wanted to find out how the story ended.
'Did Harsh see that note from Rida?' I asked.
'I don't know,' said Anjali. 'We kept it in his bag and left it. We don't know what happened? I think that plan was a flop.'

Perhaps the plan was a flop young lady but the intent was huge. Its wonderful to see that Mansi and you played such a fun, harmless ruse to bring two warring factions together. All it needs is someone to say sorry and our egos are satisfied. You even got Rida to make such a lovely gesture. It's a wonderful, creative idea to bring down tensions.

How I wish the adult world thought like that too. And maybe said sorry a bit more often.

Posted by Harimohan at 5:43 PM