Eye of the Needle - Ken Follett

Ken Follett wrote 'Eye of the Needle' when he was 27. It is one of the most famous spy stories and movies of all time. So after the tedium of plodding through Hitler's 'Mein Kampf' I decided to reward myself with a racy spy thriller. Funnily this book's plot is set in the World War II times and there are several references and scenes that include Hitler and Germany. So it was an extension of my journey. 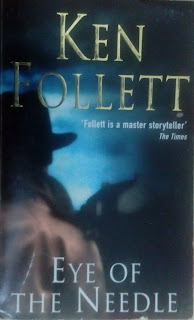 The Needle is a German spy or double agent living as an Englishman and supplying information to German intelligence. At a critical juncture in the war, the Germans are unsure about the Allies moves - will they land in Calais or Normandy is the question. The Allies plot a huge ruse to mislead the Germans with fake barracks, planes etc on the ground. The Needle gets information of the hoax, takes pictures, and trusts no one to deliver the film. As he moves towards Germany he kills everyone who sees his face, including five policemen in one encounter and lands up on an island inhabited by a young family - a crippled husband, a beautiful wife and a small child - and an old shepherd. A roaring affair, more murders (husband and old shepherd) and its between the woman Lucy and the slightly love struck Needle. Will he get away with the information and thereby defeat the purpose of the huge hoax the Allies planned or will Lucy find a way to stop him?

Fantastic. Very filmy. Lovely conflict. Now to watch the movie.
Posted by Harimohan at 9:33 AM