This was on the list because I heard some people say it was funny. I did not find it funny - a couple of laughs at the most. I found the story unconvincing, the characters motives confused and I wasn't exactly thrilled by the end of it. But a moment of freshness in the end and you forgive much of the earlier unhappiness. 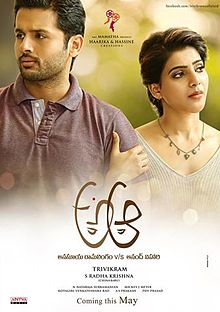 There is a rich girl who attempts suicide for rather flimsy reasons revealed later. She is dominated by mother. The girl comes across as slightly unintelligent, heightened by certain gestures etc she makes and her generally superficial character. To get away from it all she goes to a forgotten aunt and uncle  in the village - an aunt with whom her family has a twenty year old feud. Then why is she going there? Anyway she meets the boy and slowly makes him see sense i.e. that he ought to marry her and not the landlord's daughter who has always got what she wanted and who speaks a bit like a devil has got inside her.

Overall an unhappy experience for me. If you're wondering - A is for Anasuya and Aa is for Anand.
Posted by Harimohan at 8:55 PM