Theory of Everything - Movie Review

This is an adaptation from the memoir (another book!) "Travelling to Infinity: My Life With Stephen" written by Jane Wilde Hawking (on her life with her ex-husband Stephen Hawking). The story starts at Cambridge where Stephen is studying astrophysics and Jane is studying literature. That's when Stephen's motor neuron disease is discovered and he is given two years to live as his body atrophies. Jane decides to marry Stephen despite the disease and the death sentence. Within a year, they have a child. 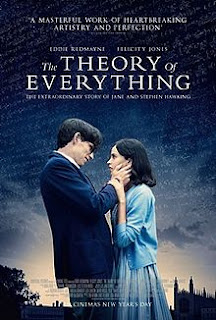 Stephen Hawking's disease gets progressively worse but he continues to make great strides as a scientist with support from Jane. They have two more children - the third child causes some speculation as Jane gets a music teacher Jonathan to help her and tongues start wagging. Stephen meanwhile gets involved with his nurse Elaine. Jane leaves Stephen and marries Jonathan. Stephen marries Elaine.

You get an idea of the way such a brilliant mind coped with life and its limitations. Eddie Redmayne won the Academy Award for best actor and deservedly so. But Felicity Jones as Jane is a revelation. The scenes when she displays her intense love for Stephen, her strength, come through powerfully.

Stephen Hawking continues to live at 73 - which should give much hope to all those patients who are given death sentences and statistics on how long they may survive. Don't buy into someone else's statistics - you could always be the exception. Interestingly Stephen refuses knighthood.

Jane Wilde's immense love and commitment is the kind of stuff that epic love stories are built on.
Posted by Harimohan at 12:22 AM