Anjali was busy writing something on the white board. After a while she tapped me on the knee and pointed at the board. "Things my father taught me" - was the heading. Under it she wrote 4 of the commandments I seem to have impressed on her. They ranged from "be happy" to "keep practicing" to "don't be afraid" to "give your best". 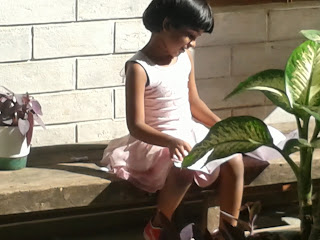 I felt the burden of having unconsciously shaped some ideas and beliefs in the young one with some banter of mine suddenly. I examined the 4 commandments and found that I perhaps needed to qualify some more to get the perspective across more clearly in some. It could be this, but it could be that also. As I started to embark on the corrections to enlighten the young soul who was so impressed by my teachings, I noticed her heading to the white board again. Oh, is she writing more of my stuff? I cleared my throat to begin my discourse when I noticed something that was very deflating to my ego.

What I had thought was going to be stuff written in stone was being rapidly erased by Anjali. For some reason I thought she'd write my commandments and preserve them till they become fossilised. Why this sudden erasure? I asked her. "I want to write something else now," she said in a rather distracted manner and moved on.

Ah, the importance we give ourselves in our minds I tell you. The board became white in no time. My commandments went into nothingness. New shapes and thoughts took over on the board. Over and done pop.

Don't take yourself too seriously Dad. Don't get attached to something because it looked good Dad. Move on Dad else you will get stuck with a fossilised board that could be used for so much more.

Thanks lady. Are there any mental erasers in the market?
Posted by Harimohan at 9:40 AM