This is a book that helps "Successful People Become Even More Successful" and has been a bestseller on the Amazon.com, New York Times and Wall Street Journal's list if bestsellers. In India "What Got You Here Won't Get You There' (Rs. 225, 230 p) has been published by Viva Books Private Limited which is doing a fine job of bringing many bestselling self-help books to India. Marshall Goldsmith is an executive coach with lots of experience in coaching CEOs of some of the world's top corporations in leadership development practices. So when I was gifted the book I decided to read up what such an accomplished Coach had to say from his experience. 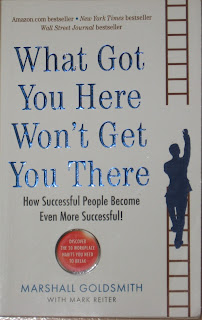 The gist of the book is indicated in the title. Primarily what gets you to the top won't take you further because sometimes we develop or rely on habits and practices that may hinder our future growth. Simply put, our previous success prevents us from further success. Firstly Marshall makes a case through examples how people's habits stop their growth - just a couple of these behaviors are enough. The problem is that even if people do understand that there is a behavior that is a problem, they may not be willing to change because they may believe that this behavior is essential to their success.

Then he makes a case to say that people change their behavior only in their best interests as defined by their own values. So he boils down to money, power, status and popularity as four of the most powerful motivators (there could be others as well, like leaving a legacy etc) and says that it is necessary to identify what drives one. Only when one identifies what motivates one truly can one make the effort to change (and therefor grow) because otherwise they perceive no threat to what they really value and do nothing about it.

Marshall lists out 20 habits that normally hold people back from the top. They are - needing to win all the time, adding too much value everywhere, passing judgment all the time, making destructive comments, starting with "No", "But" "However", telling the world how smart you are, speaking when angry, being negative about everything, withholding information, failing to give recognition, claiming credit you don't deserve, making excuses, clinging to the past, playing favourites, refusal to express regret, not listening, failure to express gratitude, punishing the messenger, passing the buck and an excessive need to be "me". One may only have a couple or more of these behaviors which can be found out from ones various sources - peers, bosses, home, juniors.The twenty first habit Marshall lists as one that is beyond all these is goal obsession.

Then Marshall gives out ways on how to get out of these habits. But before that one must find out one habit that needs changing - he suggests various ways to get feedback. One of the ways Marshall uses is to get feedback from coworkers whom he enlists to support the change. He gets the coworkers to agree to four commitments - to let go of the past, to tell the truth, to be supportive and helpful and to pick something to improve themselves. And then the various ways of getting feedback - solicited feedback, unsolicited feedback and observational feedback. In observational feedback Marshall gives a few methods that any of us can use to get feedback about ourselves. They are as follows - making a list of people's casual remarks about you, turning the sound off in meetings (so you understand through people's gestures in a heightened sensitization to their gestures), completing the sentence (If I start coming on time I will...), listening to your self-aggrandizement / self-deprecation, look at the reactions at home to your behaviors (does not listen...etc).

One you figure out the habit to change, you start with an apology and a commitment to get better. Simple as that. Then he advises you to advertise the fact that you are changing and buy in from all those who wish to see you change. Then, start listening - with all your body, heart and soul. Be grateful - express gratitude. Follow up on what you have begun or learnt, even at the cost of hiring a coach - else it becomes just knowledge. Marshall then comes with a feedforward system where he asks the people who gave him feedback for two suggestions on how to get better which one can use.

Marshall goes further and gives out a few rules that help the change process - being honest, measuring and monitoring, monetising, picking the right things to change and being proactive about the process. Marshall advocates a process where the bosses give their team a memo about themselves - their beliefs, shortcomings and stuff upfront so they get their buy-in. He also cautions bosses against being prejudiced against employees (I know what they want, I know what they know, I hate their selfishness, I can always get someone else), against doing things routinely and thinking that the employees are not getting it, about managing others like you were managing yourself.

Marshall's book makes a lot of sense not just in the corporate setting but even otherwise. It is about being a better human, about getting the best out of people, about being better leaders. As with every book I look for a couple of things that I take away and in this I found the part where he says that - people like doing favours, so ask them and they will instantly buy in and help you achieve your goal. It works to a double advantage - their help and their partnership. I liked what he says about listening as well. Much of it can be straightaway used to discuss with people in certain companies I deal and consult with. Overall, a fine book for executives and specially, corporate leaders with lots of examples from top corporates that one can relate to easily..
Posted by Harimohan at 12:56 PM