The Music Room - A Must-Read Book

Firstly a huge thank you to Sreenath, my friend from Bangalore, who gifted me 'The Music Room' by Namita Devidayal recently, and was confident that I would like it. I had heard of this book before but something about the title put me off (I imagined a sad, dusty music room in my head, and never got down to it). But am I glad I read it - though late! This book is not sad or dusty - it is new and shiny and glitters with vignettes into the lives of some great artistes, into the musical tradition in India itself, into the pursuit of excellence, into the wonderful guru-shishya tradition. And it is told in such racy fashion by Namita Devidayal, whose factual story it is, that I could hardly stop myself from getting back to it after every break. Many times I could not put it down and kept reading it despite pressing deadlines for appointments and other things. 'The Music Room' was Namita's first book and a very fine debut it is indeed, the deserving winner of the Crossword Vodafone 2007 Popular Book award and even an award by the Outlook. 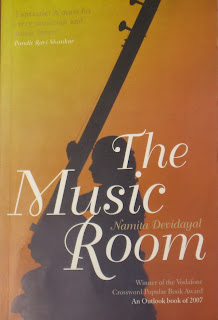 'The Music Room' is an account of Namita's learning of Indian classical music from one of the great practitioners of the Jaipur gharana of music. Namita belongs to both the west and the east, a generation (my generation) that was happy growing up with western music and western ideas, quite comfortable in not knowing our roots, and not caring much about it either. But her mother wants the nine-ten year old to learn classical music and finds her a worthy teacher - Dhondutai.

The book begins with Namita's entry into Dhondutai's little shared flat at Kennedy Bridge, a locality in Bombay infested by pimps and brothels and how she starts learning music from a great classical singer. Dhondutai lives with her ageing mother Ayi, in a rented space along with the owner, another old lady. As Namita grows up, she realises that she learns much more than music from Dhondutai, about how the great artistes practiced and learnt and taught, breathed and lived music to attain the kind of perfection they did. About how they lived, how much they sacrificed. And mostly, for nothing in return. Namita learns, of the almost scary extent that Dhondutai and her gurus go to, in their quest to perfect their gift and though a highly gifted singer herself, holds back, runs away from this world that is so difficult, that asks so much from her. Thankfully Namita did escape from that world, because she got to write this wonderful book.

Told mostly from Dhondutai's viewpoint 'The Music Room' traverses upon Dhondutai's childhood, her early influences, her sacrifices to become a committed classical singer of one of the mysterious and eclectic gharanas - the Jaipur gharana. Dhondutai shows promise at an early age in Kolhapur where her father Ganpatrao Kulkarni worked as a rent collector. One with an ear for music, Ganpatrao is eager that his child learn music from the famous Khansahibs of the Kolhapur court - Alladiya Khan, the most famous singer in that gharana, and his sons Bhurji Khan and Manji Khan (the oldest son, Bade Khan returns to Jaipur to recuperate from a perceived illness). Bhurji Khan rejects the young singer at first as she is too young when Ganpatrao (a Maharashtrian brahmin) first approaches him (a meat eating Muslim), but when the time comes, Bhurji Khan himself approaches Ganpatrao and tells him he would like to train Dhondutai. The conditions are that she will not marry for at least five years and will do what the guru asks of her.

And so Dhondutai learns music from one of the greats, goes to the Vikramaditya conference in 1944 with Alladiya Khan and witnesses some of the greatest musicians playing in that musical festival. When Bhurji Khan moves to Mumbai and falls sick, Dhondutai and her family help him add some years to his life by getting him treated at her uncle's house in Hyderabad. When Bhurji Khan dies, Dhondutai's family goes to Indore and then to Bombay where they meet the legendary Kesarbai, a Padmabhushan awardee, one of the finest voices in classical music, who is so possessive about her skill and art that she did not let anyone record  it. Kesarbai, the greatest living practitioner of the Jaipur gharana then, is finally ready to take a pupil and she agrees to take on Dhondutai who remains the only shishya of Kesarbai. Kesarbai's condition is that Dhondutai must not teach what she learnt to anyone, must not give performances without her permission.


Learning from the foul mouthed, non-veg eating, leader of a colour life, Kesarbai, is a challenge to Dhondutai. But Kesarbai, a devadasi by birth, has her own demons to vanquish, her own agenda to prove and she holds fort, using her music to dictate her terms on life. Kesarbai likes the good life, enjoys finery and jewellery, has riches and fame, but does not want her daughter to learn music and be a singing woman. Kesarbai, from North Goa, learns her music from Karim Khan of Kolhapur to begin with but she mainly learns all her music from the great Alladiya Khan who takes a hefty fees from her sponsor, one of Kesarbai's lovers, to teach her music for over ten years first in Bombay and then in Sangli.

And then there is that part about the legendary Alladiya Khan who would sing at the King's court in Kolhapur, at the Mahalakshmi temple in Kolhapur, wearing a sacred thread like a brahmin, talking Hindu philosophy and also performing namaz five times a day. Alladiya Khan's most famous student is Kesarbai and Kesarbai's only student is Dhondutai. Though Alladiya and his sons are no more, Bhurji Khan's son Baba, who is Dhondutai's great friend lives with his family in Kolhapur.


Dhondutai learns much from Kesarbai and becomes an exponent of the Jaipur gharana. When she decides to go away to Delhi at the age of forty or so, Dhondutai for reasons best known to her gives up her shot at fame and riches. But she is happy in having lived her life in pursuit of music, in pursuit of perfection and she is happy in her little house, with few students, with her gods, connecting with the divine through her music. Namita remains one of her favourite students, another gifted one, who never took the leap of faith to achieve what she was meant to in the world of singing. The guru and shishya meet at Dhondutai's residence in Borivli, a flat that the Maharashtra government gave her at concessional rates. The book ends with a chapter about a visit to Kolhapur made by the two, Dhondutai and Namita, where they perform at the Mahalakshmi temple. A ninety year old man recognises Dhondutai from her singing and it is a tender moment.


I loved the book. It is fantastic reading and though I do not know much about the technicalities of classical singing I am already richer by the experience. The riyaz, the effort that the masters put in, their motives to learn music (an act of vengeance for Kesar and an act of devotion for Dhondutai, perhaps an act of serving god again for Alladiya Khan), their ability and inability to market it for riches and fame, their choice to take their hard earned knowledge with them and distribute it only to the deserving, the patronage, the quality of perfection - it all makes wonderful reading. Two things that Dhondutai says made a connect with me. One when she says that 'when you sing a raag you must sing it like it is the only raag you know'. Profound stuff that I choose to take to my life, to all the things I will do from now on. Another, when she says that this knowledge must be given only to the deserving. It is also in interesting commentary on how the great artistes suffered financially for lack of recognition because they could not market themselves in an increasingly commercial world.

I am impressed with the way Namita wrote her story. She is a fine writer and I could barely put the book down. Apart from all the insights into the world of classical singing (which has inspired me to listen to some of the Masters in classical now) I am also inspired to visit Kolhapur and see the Mahalakshmi temple. I saw a few reviews of 'Aftertaste' her next book, again by Random House and a very interesting subject. I can identify with Namita because she writes so easily of her many facets, converting them into stories with her fluid, flowing style -  if she wrote a fantastic story of Indian music from her music lessons, she wrote about the world of money making in a bania household in 'Aftertaste' - both from her experience. The second book comes from the Princeton graduate who writes a personal finance column in the Times of India. I am convinced that Namita will not be short of stories long as she writes so creatively from her own experetience. I do the same myself and wish to explore as many facets I have through stories but there the comparison ends - she writes far better than I do.
Another thing that is common to us is that her first book was published in 2007, the year that my first book 'The Men Within' was published. In fact 'The Men Within' made the long list of Crossword-Vodafone awards and I was there when they announced the short list. Namita won the prize of course and now I know, deservingly. Funnily, another similarity between both our first books are that they are guru-shishya stories (mine is a coach-cricketers story in pursuit of excellence), both drawn from experience.

I highly recommend this book to anyone, whether you like music or not because you will be richer for the experience and it is a damn good read. It is human drama at its best and a great story. In fact 'The Music Room' and Namita Devidayal will now join the ranks of Chitra Divakurani Banerjee and her 'Palace of Illusions' in the finer writing from Indian authors of recent times in my list. It will be also be one of those gifts I will give to my near and dear. Well done Namita Devidayal. I am now looking forward to read 'Aftertaste' which promises to be an equally good read - and much more from your pen!
Posted by Harimohan at 3:09 PM

I am really Glad you liked the book Hari. Hope now you will agree at least some Indian writers have that depth in their writing. Amazing stuff from Ms.Namita.

Hi Anon,
Yes, I really do like her style - and the fact that she writes from her experience which gives her work so much more credibility and conviction. Like I said, I loved Chitra Divakurani's 'Palace of Illusions' - this follows close behind. But still too few writers scratching the surface from the new crop. Would love to see more of this, more diverse subjects - India just has too much to be written about superficially. But really nice read.