As part of Father's Day celebrations I let Anjali lead me through her school and show me the things she does at school everyday. After some fun and games where I was asked to make a snack (which Anjali wisely refused to eat), make some stuff from paper (which turned out all wrong) and some other such stuff which would have made Anjali wonder how I ever got through primary school, the school had a couple of simple things for me to do. One was to get blindfolded and trust my 3 and a half year old to lead me on a path which she faithfully did and another where we had to give our handprints as a souvenir for ourselves. As always I was amazed at the genuine warmth and affection that everyone at Daksha has for children (and for bumbling fathers). Here is a picture of our handprints taken on June 26, 2011. 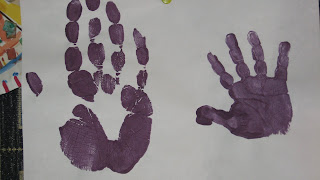 Posted by Harimohan at 2:47 PM