S. Hussain Zaidi and Jane Borges are crime journalists. Zaidi is a veteran, the resident editor of the Deccan Chronicle/ Asian Age, Mumbai. He has also written 'Black Friday' which has been made into a movie by Anurag Kashyap. Jane Borges, 24, is an award winning senior sub-editor with the Asian Age who started her journalistic career when she was eleven - writing columns for the Times of Oman. 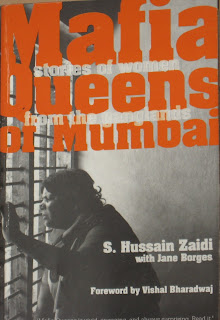 This is the second book of its sort that I am reading - a book of profiles and insights into some interesting characters, lives that took paths that are interesting for their motives, their expectations, sacrifices and compromises (The first was the book on India's Small town Cricketers by Guruprasad). 'Mafia Queens' is the kind of a book that is easy to read, intriguing and horrifying at what goes on, one curtain away, in our world.

The queens Zaidi (and Borges) mention range from Jenabai Daaruwali, of Dongri who dealt in illicit liquor bootlegging and made crores (Mumbai, then Bombay was under Prohibition then, and probably is under Prohibition even now in some weird manner called permit rooms if I remember right). She was driven to crime by circumstance and is described as a wily old lady who was powerful enough to broker the truce between warring Muslim underworld dons - Haji Mastan as the patriarch of the meeting and chief beneficiary and the warring Ibrahim brothers and their opponents the Pathans  from Karim Lala's side. Then there is the story of Gangubai of Kamathipura, the protector of prostitutes of Kamathipura, the one who lets off those that really don't belong there, who comes to Bombay with Bollywood dreams and is sold off to a brothel, her allegiance with her rakhi brother Karim Lala and her rise as a madam or gharwali in Kamathipura. The book says that Ministers and journalists would meet her at her home in Kamathipura, that she actually met Prime Minister Nehru in connection with some issues social and political.

Then the tale of Sapna didi told mostly through Hussain Ustara's point of view and how she single handedly tried to avenge her husband's death by killing Dawood Ibrahim and ended up in a messy and gory death. Actually Sapna didi is originally Ashraf, an educated, beautiful muslim girl in love with her husband. Then we move on to the stories of the narcotics dealers of Sion-Koliwada, the Papamani's and the Jyoti Adiramlingam's who have dealt in crores of rupees from selling drugs and who built proper organisations to protect their money. Monica Bedi figures in the infamous list as a mobster's moll though I don't see how she fits in as a mafia queen - she was just a girlfriend of a mobster. But she is high profile and good looking so she gets an entry which is not very fair to her from whatever is written about her. All she did was fall in love with someone who she did not know was a gangster. There is no mention of her killing, kidnapping or threatening people and all she has against her is the passport forgery case which she would have signed at the behest of her underworld lover.

The wives of the Hindu dons come up - Asha Gawli the wife of Arun Gawli and an active front for the gangster-politician (who has the best record as an MLA it is said), Neeta Naik, killed by her husband Ashwin Naik, Sujata Nikhalje, the wife of Chhota Rajan and real estate baroness and Padma Poojary, the now absconding wife of gangster Ravi Poojary who has skipped bail and is missing with her husband. The mobs girlfriends take up a special chapter - from the well educated, net savvy Mrs. Paul (or Ms. Shameem Mirza Bed, the wife of Chhota Shakeel's close associate Arif Beg), the beautician Rubina Siraj Sayyed, another Chhota Shakeel friend. The book ends with the stories of the beauties - Tarannum Khan, the bar dancer who shot to fame when cricketer Muralitharan's name cropped up as her friend and visitor. The beautiful, educated young lady resorted to bar dancing to support her family and built a huge bungalow at Versova through her earnings, much of it, they say, is from betting on cricket. That seems to be her only crime which has not been proved, apart from dancing which is also rather a minor crime for her to figure in this list. One Archana Sharma, an Indore girl who was well educated and a Manisha Koirala look alike, who came from a decent background and who had a hunger for the good things in life, who wanted to be an actress and slowly sunk into the underworld and became the dreaded gangster Babloo Srivastava's girlfriend finishes off the list. Now this lady definitely deserved a place in the main section of the book as an active participant in criminal activities ranging from murder to kidnap to extortion. Unfortunately we do not even get to see the photo of this bewitching beauty whose whereabouts are not known - dead or alive.

Mafia Queens of Mumbai is an interesting read if you like the blood and gore of the Mumbai underworld. It is not for the weak hearted and leaves your stomach churning. It gives a wonderful account of how these women have more often than not been victims of circumstances - most of them never started out to become dons or criminals. Some had to do it to survive, some started off with Bollywood dreams and ended up on the wrong side being cheated, some fell in love and did everything for love.

I thought the book could have been crisper and more even in its presentation. The initial parts of Jenabai, Gangubai, Sapna did and company are loosely fictionalised accounts of their factual lives. I think it would have worked better if Zaidi had stuck to telling it straight and narrow, in the voice of the dispassionate narrator. In the fictionalised parts where you know that it is being fictionalised for dramatic effect, however minor, you get distracted from the main story, from the facts which are the most important parts in these types of books. And for a reader to skip pages or be distracted where the content is dynamite is not the best of presentations in my opinion.

Zaidi's and Borges's work in digging out information and being true to what they report of these ladies is commendable. Zaidi is the man to meet in Mumbai if you want to know anything about the underworld - Vikram Chandra, Vishal Bharadwaj, Anurag Kashyap and probably many more - have taken his help to create their bestselling books and blockbuster movies. Jane Borges will be the woman to meet in a few years if she continues doing crime reporting. Surely this is a one-of-a kind book that gives you an idea of what goes on in Mumbai's underbelly. One that makes you shiver and shudder.

It must be a tough job,  and one can sense the danger Zaidi puts himself into when he goes to meet Papamani in Sion Koliwada. I am glad Zaidi penned his experiences down and am waiting for the one he will write many years down the line - the one that tells all!
Posted by Harimohan at 9:16 AM

Read the book couple of times and still reading !! Can't wait to see who will convert this into a movie!!

i m not much a book buyer/reader of any kind.this is the book cought my attention at book shop and i m not able to believe on myself that i can actually read book so passionately even inbeetween treating patients at clinic .i m liking reading this keeping aside my approaching entrance books.