A Passage to India - E.M. Forster

I have always wanted to read this book and somehow the title and the name of the author remained imprinted in my mind and when Abhinay got a bunch of books from Akshara and offered me a pick I chose this along with a few others. It was a wise choice. 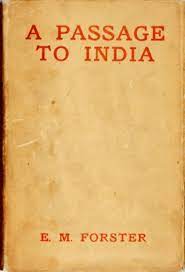 The story is set in a small town in North India when India was under colonial rule. The locals and unhappy at the discriminatory treatment they get from the British. Each one finds his way of dealing with it - some rebel, some accept it. Of the lot we follow Dr Aziz, a young doctor, whose wife had left him and who has certain ideals. He is a good man, rather pompous, and borders on the rebellious when it comes to the British. Aziz has one encounter with an old lady Mrs Moore, the local British Officer's mother, where they both end up becoming friends. Here is where Forster scores because he explains the subtle nuances in their character so beautifully, they doubts, fears, aspirations and actions.

Mrs Moore's prospective daughter-in-law Adela comes to visit India and perhaps get engaged to her son and in a strange set of circumstances finds herself and Mrs Moore on a visit to the famous Marabar caves near the town. At the caves an incident happens and Aziz is arrested for having molested Adela. The lines between the British and the Indians are drawn - with only Mr Fielding, the Principal of the Government College asking for a fair trial to Aziz who he feels has been wrongly accused. It so happens that Adela withdraws her complaint in court saying she is not sure but by then much damage has been done. Anyway the engagement is off, Azis leaves town, relationships break up.

It's a brilliant story of the times, of the way society was then and more importantly of human nature. Loved reading it. Thanks Abhinay.

Posted by Harimohan at 5:13 PM