Hari was my skipper when we played Under 22 cricket for Hyderabad in 1983. He was a hard hitting wicket-keeper batsman with precocious talent - he played Rani Trophy in his 12th class at school - and an astute leader who led all state sides from Under 15, 19, 22 and onwards. Then he made it to the medical college and gave up cricket. We knew he had married early and was practicing and managing his father's nursing home Sridevi Nursing Home at Ram Nagar. After a few years we heard he was CEO Apollo Hospitals and doing extremely well. Most of us reached out to him for someone in need of help at Apollo and Hari was always there and continues to be. Recently he took excellent care of our old coach Rahmat Baig in a manner few would do. 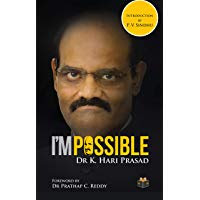 I was delighted when Hari said he was writing a book on his life a year ago when I met him. And from what I read of the 175-page book, it is a worthy effort. Hari breezes through his childhood, life at home, his family village, school, love for cricket in exactly the same fashion as he batted - no-nonsense, direct and at it right from the word go. Not a word seemed extra, in fact, his economy of words was fascinating because he did manage to get across the essence completely in just a few words. I could sense what he was thinking as he suddenly adds a line or two to describe a feeling, a visual and off we are again in a flurry of shots, scenes and events. Hari batting at his best.

His cricket consumed a large part of his school days and he was certainly in line for big things if he continued. He had this innate confidence in himself that radiated to one and all. Something in his mind as he went about crafting his innings or his life with an uncanny decisiveness. It showed in his shots -  for example, most batsmen merely tap the sweep shot whereas Hari would launch into a full-blooded shot with all his strength against the turning ball. Now that is what someone said about talent and genius - talent is what others cannot do, genius is what talent cannot do. That was how he approached his game and his life I guess. Another time there was a player who got into the team through some shady route - Hari's response to this unfair practice - he gave me and the other fast bowler new balls and asked us to liberally pepper him with short balls in the nets. Decisive.

The same decisiveness made him fall in love in his first year, give up cricket and also marry his love and classmate Suma at the end of his first year. He managed to convince everyone to this unconventional wedding when he was 19 and she was 18! Children a few years later, his MD in anaesthesiology at Mangalore, practise at his father's nursing home show how he immersed himself in his new chosen way of life. The parts where he wrote about his experiences as a doctor are moving insights into how he cared for his patient's health and the ways many of his patients remain grateful to him. Hari not only treated them, he also counselled them.

Then a move to Apollo Hospitals thanks to another decisive move by him, and his entry into emergency medicine which he pioneered in India. His rapid growth to become the President of the group and a busy lifestyle. The busy lifestyle was also an unhealthy lifestyle - he smoked 30-40 cigarettes, weighed 115 kgs and ate indiscriminately without any exercise - all the things he would probably tell his patients to avoid. To give up smoking he started chewing tobacco - both habits passed on to him by his pal Pankaj, who I hope is healthy now (one of the few Hari mentions by name in the book). Diabetic neuropathy, high blood pressure were all early signs and he started to work on his weight, his diet and health. Just when he thought he had come out of it came another shocker - leukaemia.

Hari dealt with it in his usual manner - looking at the problem dispassionately, taking charge of the situation and doing what needs to be done. The same way he chased a 500 odd run score against Tamil Nadu while compiling 217 - keeping out the danger, chipping away bit by bit, attacking when it needed to be attacked. Soon he came out healthier, lost 50 kgs and now looks like someone who is less than 30 years old. It's an incredible transformation and one can only laud his grit, determination at achieving this turnaround.

It is an inspiring story and I will certainly take many lessons from it. The sight of Hari, looking almost like a schoolboy at his launch day, when many of his friends could not recognise him, was a clear pointer to how we can take care of health by eating well, exercising well and resting well. It is well written and I found myself glued to the narrative. Great story, well written and I am sure the book will do very well (it's already in its third print run and sold over 2000 copies according to the publisher). Good luck Hari and well done once again.
Posted by Harimohan at 7:39 AM