Around the World in Eighty Days - Jules Verne

The second Jules Verne book in a few months. I thought I'd revisit this classic after my school days. Once again, a very interesting topic, a nice array of characters and the entire world is the setting. I am impressed by that breezy style, the way they convey so much in so little. 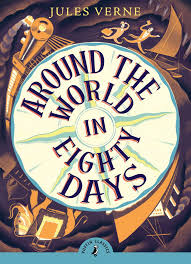 The taciturn, wealthy and eccentric bachelor Phileas Fogg has a bet at his club with some non-believers that he can travel around the world in eighty days, a conversation that is triggered by a news item. A wager of twenty thousand pounds is placed. Fogg takes off with his new man Friday Passepartout, a sturdy Frenchman, in a hurry. There being a bank heist of some fifty-five thousand pounds the very day draws the suspicion of the police on the hasty exit of Fogg. One Mr Fix is assigned to this case.

By ship, train, sledge, elephant and other means they travel to Paris, Italy and through the Suez to Bombay. A train to take them to Calcutta stops. He buys an elephant and sets off, rescues a woman who is about to commit Sati, reaches Calcutta and sets off to Singapore, Hong Kong. The rescued woman also joins him on his travels. Fix gets Passepartout drugged, thus delaying the process. But they find a steamer, catch the ship and head to America where they land in California. An attack on the train by the Sioux ends in a massive fight between the Sioux and the gentlemen on the train. Passepartout is captured and when Fogg nobly goes to rescue him, he loses valuable days. By the time he reaches New York, he misses the ship. This time he hires another boat and sets off full steam. After some more adventures, he does reach Liverpool, but is apprehended by the persistent Mr. Fix. When Fogg reaches London, he is a day late. But then he realises he is not because he gained time by going steadily eastward, and just about makes it to his club to win the wager. Of course, he also wins the lady. And is absolved of the charges.

All's well and that ends well. Full of twists and turns, local practices and customs. Of course, Verne suffers from the notion that the white man is civilised and the rest are not and it comes across in so many ways in his travels in India especially. A white colony and a black colony - where he finds relief in the white colony etc. But then those were the times when they felt the civilised owned the uncivilised - a rather uncivilised thought.

Nice script for a movie.
Posted by Harimohan at 12:04 PM