The book is an anthology of seven essays/stories - all desi and modern. The anthology is curated by Ranjani Rao and Nandini Patwardhan. It is a slim book of 52 pages and a delightful read. 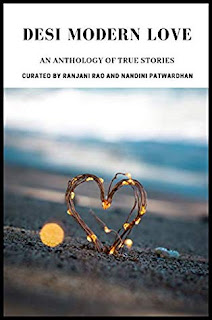 'Facebook Friends' by Kalpana Mohan is about a couple who find themselves caught up in extreme Facebook faceoffs - statuses, unfriending etc - until they rediscover each other off it. Very nice. 'Your Mother in Law is a Mother Too' by Chandrika Krishnan is exactly that - a reminder that your mother in law is a mother too so be pals with her. 'One Small Step for a Man, a Giant Leap for Womankind' by Surabhi Pandey is about a career woman getting married to a husband living abroad and making excuses to not join him - until it strikes her that she should honour her commitment. I liked it. It had some strong energy, honesty. 'Second Time Around' by Ranjani Rao is a delightful story of a second marriage - well written as always by Ranjani. Again, very honest, witty, full of detail and insight. 'Acceptance' by Nandini Patwardhan is about two people meeting twenty-five years after college during which time he proposed marriage and in many ways shows how much he cares for her - and how they end up being friends who make each other happy. Subtle and nice. Well written.  'Motherhood Cleaved' by Lakshmi Iyer is about a mother with adopted children who look different - Caucasian and Asian - skin, hair colour and how she copes with the differences and the underlying love. Again well written. 'What's Love Got to do With it' by Sathya Ramaganapathy is a delightful love story that plays on words from song titles - a story about a marriage that worked out really well despite her misgivings. She has a way with words, funny, light, breezy and gets the story across well.

I found it to be a very good read. The stories are interesting and written well. Impressive writing by the contributors. Well curated.
Posted by Harimohan at 10:16 PM