Bakul gifted me two booklets - 'Vedanta 24x7' and 'The Problem is you and the Solution is you'. They are short booklets. I picked up the Vedanta book because I had no idea what it was. It's explained right up front - that Vedanta is a form of inquiry where one discovers the meaning of the word 'I'. Of course, he says it does not happen unless you are prepared for it. But there is a clue - he says the prepared mind is one that has in relative means what it seeks. Not easy to get right but it means that if you have some contentment in you, you are on the way to gain contentment in absoluteness. 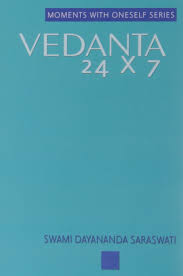 There is some talk of how one must accommodate others - let them be instead of trying to change them. Don't interfere and accept things are they are. Human choice is over action, not reaction. To exercise more of action, heighten awareness.

He says that the Vedas give a plan to make us mature. He talks of a duty-based society - based on the varnas which he says is beautiful and not caste-based as people mistake it to be. One must perform one's dharma. Sweeping is not inferior to performing puja. Varna he says is our duty to society, humanity and we must strive to do it the best we can. And it is better to die following our dharma.

If we have our dharma to guide us and there are no birth-based varnas, I fail to understand why there is so much discussion on the varnas. People will be born and will choose their varna based on their - dharma, like/dislike/propensity/talent? Or is there something or someone who will tell a person what their dharma is? What if someone believes that their dharma is to mess with other people?

Swami says that the Indian society is non-aggressive because of their emphasis on duty. We are duty-bound he says and also gives the example of how all other countries had a civil war after the second world war except India - because we are duty-bound.

Here he specifies that brahmanas as 'thinking people'

Clearly, the brahmanas must be kept happy and free of all fear. And of course, all the others too.

Somewhere towards the end, he says that the varna system is not about caste system. (Fine, that makes sense. But who will slot people into varnas if it is not about birth then? Are there systems or schools that are expressly doing the job of finding what varna a child should belong to?)

One must understand that the same person cannot do all the jobs he says. But they can, with some education and training. I have several problems with this line of thought. Anyway, thanks Bakul for gifting me this book.