I have no idea where this book came to me from but I finally decided to give it a read. There are a few books on my shelf that had been there for years, and once in a while, I zip through them. 'Daddy's Boy' was one of them. 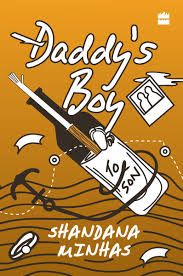 It starts with a young man who comes from Lahore, a man with an unpronounceable name, to Karachi. He has a mother in Lahore and a fiancee called Lalrukh. In Karachi, he meets three friends of his father, a retired navy man who loved the sea. There are three friends of his father who speak a bit like the witches in Macbeth. They hustle the young lad through the last rites of his father, get him drunk, take him on a boat next day, tell him they actually want to bury his father at sea because he liked it so much (the other body was that of some homeless man), have him meet the beautiful Alina with whom he loses his virginity. Soon he finds that the three friends have conned him, the girl is a prostitute and goes to confront her. She has a young son who shoots at our hero and the girl comes in between and dies. The son goes with his father to Lahore.

That's the story.
Posted by Harimohan at 7:32 PM