When we studied at Osmania University Engineering College during the 1984-88 period, the dominant student political party was the Progressive Students Democratic Union (PDSU). The party was leftist in leaning, pro-poor and pro-backward, with progressive ideas. Its ideological opponent was the right-wing RSS affiliated Akhil Bharathiya Vidyarthi Parishath (ABVP) which spoke of nationalism, bharitayata, culture etc, mainly upper caste, the rich and the landed. The Radical Students Union was then banned - they were extreme left and considered naxalite sympathisers. George Reddy is considered to be the founder of the PDSU - it came into existence after his death. Called the Che Guevara of Osmania University, he has been an enigmatic figure, the rebel with a cause. There have been movies based on him - Alajadi in Telugu by Tammareddy Bharadwaja who was apparently his contemporary and knew him well, and the role played by Ajay Devgan/ Suriya in Yuva. 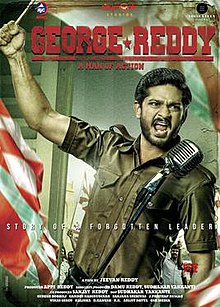 PDSU was dominant in the campus those days. They had two factions within PDSU by 1984 - I remember my classmate Aveena (now a full fledged capitalist with a degree from Columbia University) being in one and Balaswamy (now a senior engineer in the APSEB) in the other. We'd frequently see the name George Reddy written on the walls alongwith the symbol of the clenched fist and the words 'amar hai' and 'jeena hai to marna seeko, kadam kadam par ladna seekho'. PDSU was anti-ragging I remember and very active those days with lots of support from the hostel boys. We Again the distinction was clear - hostellers who'd come mainly from up country locations and day scholars. We heard some stories about George Reddy, a young student killed on campus. Until I saw the movie I thought he was an engineering student - but then I found out that he was studying science and was a gold medallist. The connection to the engineering college - he was brutally murdered in the Engineering College Hostel I by a mob in 1972.

George was born to a Telugu father, Raghunatha Reddy and a Malayali mother, Leela Verghese. He grew up in Palakkad, did most of his schooling from St Gabriel's High School, Kazipet (my alma mater again) and then joined the Osmania University. Influenced by Bhagat Singh, Che Guevara and opposed social discrimination, inequality, injustice, Marxist ideology, Naxal movement, Black Panthers movement in the US he had a burning passion to fight and change things. He was a boxer, learned kalaripayattu (as per the movie) and was handy with his fists. That he was a brilliant student is well established.

I went with Ramaraju, who also studied on the campus at the same time as I did, and we both enjoyed the movie and related to the campus shots, the hostels, Arts College, engineering college, canteens, messes. Sandeep Madhav essays the role of George Reddy convincingly, understated, and fully looks the part. It was nice to see Mahathi Bhikshu, actor and performer, daughter of Prof Aruna Bhikshu of the University of Hyderabad (who plays a cameo herself as the older version of Mahathi) in the role of Sreedevi, the second female lead. Also, Sanjay Reddy as a student-friendly Professor.

On the negatives, there were too many opposing groups so I lost count of them - enough to say that there was one right-wing outfit and one Dhoolpet gang. I would have liked it if the opposition were just these two parties - Kaushik and Satyadev didn't make any sense nor could I get the context. The wigs could have been taken care of a bit. The fights were nicely done, a couple of songs avoidable, but on the whole I loved it. Good job by Jeevan Reddy and tam.

It may not be out of context to mention the name of Vijay Kumar, who was our classmate in Engineering, wiry, shirt unbuttoned till his third button, with a deep baritone, terrific English speaking skills, unbridled passion for the cause. He was a great orator they say though I never heard him, was very well-read, knew his philosophies well and extremely intelligent, just as George Reddy was. Vijay was also a student leader and followed the RSU philosophy if I remember right, discontinued in the second year and went underground. He resurfaced after a few years, in a high profile surrender with NTR, the then Chief Minister and was shot dead in an encounter sometime after.
Posted by Harimohan at 11:58 AM